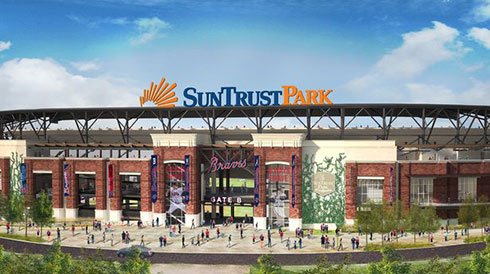 I love the Braves.  I hate SunTrust.

What I’m dealing with here is a perfect conflict of interests.  A catch-22, if you will.

A little backstory: I used to work for SunTrust corporate.  Making signage, assets, collateral materials; all sorts of marketing materials that the company used at their over 3,000 branches across the eastern seaboard.  It wasn’t a glamorous job, but it was for a reputable brand, paid decently, and I worked with some decent people.  After about three years, the company decided that in-house designers were unnecessary, and is so often the case, felt that they would rather pay external companies way more money for the same services, but minus the obligation to pay for benefits.  So they outsourced myself, eight other designers, two copywriters, an editor, among 1,100 other employees throughout the entire company in 2007.

On principle, I moved my money out of my SunTrust account, closed it, and have made a conscious effort to not support them or any of their endeavors since then.  I turned the other cheek when they got the naming rights to the luxury home plate section at Turner Field, even if it meant being subjected to their big ugly fucking logo during home games.

SunTrust Park, however, now that hurts.  It actually makes me feel genuinely conflicted and feeling trapped.

I know I often declare myself the worst baseball fan ever, because I hardly go to Braves games as it is now, and when I do go, it’s usually for bobbleheads, and I’m never guaranteed to stay the entire game.  And in spite of my general moral disagreement with everything involved with the Braves plotting out their new ballpark, there was still a part of me that was happy and excited about the idea of the Braves having a new ballpark.

I imagined that Turner Field in 2016 would be somewhat of a swan song for the Ted, and there might be some cool things happening during that season.  I envisioned going to THE LAST home game at Turner Field, and wondering what might happen then.  And when the new park opened in 2017, I imagined that I would eventually make my way up there, and experience the feeling of newness and exploration of yet another new baseball park, despite it being for my home team.  And naturally, use it as an excuse to update my ballpark site, among the teams that are having multiple entries for the rapid changing of venues.

I don’t want to walk into a gigantic venue with the SunTrust logo and its fucking rays adorned all over the place.  I don’t want to be enjoying a baseball game, and then turn my head in between innings only to see a giant SunTrust logo on top of the marquee, or the scoreboard, or any other integral ballpark component, which will undoubtedly snap me back into the shitty reality of being in the presence of the company that boasted “seeing beyond money” but naturally, hypocritically cited money as the justification for firing 1,100 employees.

I really want to proclaim that I’ll never go to SunTrust Park, as long as they have the naming rights to the venue, but that’s probably not going to happen.  Whether it’s bobbleheads, or just my own innate curiosity, I know I’ll eventually go there.  I can resist for as long as I want, and come up with rules to justify my means, like only going when the tickets are complimentary, or on someone else’s dime, but the fact of the matter is that I’ll eventually probably still go, which in some capacity does disgust me.

Regardless, I really fucking hate that it’s come to this.  SunTrust Park.

Being a Braves fan, I’ve witnessed and shrugged off a lot of crap that comes with being a fan of a sports team.  Losing seasons, underperforming players, failed playoff runs.  I bore witness in 2010 as the Braves got no-hit, and although I didn’t witness it, was still the guy people mocked when they got (combined) no-hit again just earlier this month.  Tonight, they’ll probably be the unfortunate victim to having their divisional rivals celebrating the clinching of the division crown on their own home field, when they lose to the Nationals, because they’ve recently decided that they’re playing golf, and the closer to zero they can be, the better.

None of that shit really bothers me.  Sure, it might make me feel frustrated or a little disappointed, but nothing I can’t shake off with a night’s sleep.

But SunTrust Park, I can’t let go, I can’t get over it.  For starters, the new ballpark isn’t even open yet, and when it does, who knows just how long SunTrust locked up the naming rights to the place.  One thing is certain is that it’s likely not going to be for a very long time, because unless you’re Dolphin Stadium, naming changes do not occur very frequently.  It’s going to be SunTrust Park for a substantial amount of time, and the thought of that actually does disgust me.

Even when the Braves had a miserable season in like 2008, traded away all their best assets and ended up losing 90 games, it didn’t deter me from remaining a Braves fan and looking forward to the future, and hopes for better things.  Even when the Braves underachieved to monumental levels in 2011, and again this year, doesn’t change the fact that when anyone asks me what my favorite team is, it’s still “the Braves.”

But the Braves selling their soul to SunTrust?  This is the first time that the thought of ditching my allegiance has ever crossed my mind.  I don’t want to be a fan of another team.  But there’s also a part of me that seriously doesn’t know if I want to remain a Braves fan either.  I still like going to other ballparks, and checking out minor league parks.  There’s still a handful of MLB parks that I haven’t been to yet, either.  And when it comes to apparel itself, the Braves’ classic A logo is still amongst the most classic and if for anything at all, representative of where I live, and not necessarily the team I support.

This just sucks, all of it.  The Braves’ season is likely coming to an end on their own, current home field, and it’s announced that the future home field is going to be sponsored by one of my interpretations of a devil incarnate.