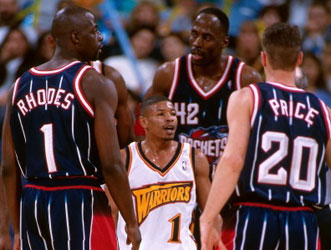 I’m contemplating making a day trip up to Cleveland, Ohio, so I can knock off one more ballpark on my ongoing quest for all 30 Major League Baseball parks, but it dawned on me that there was some room for concern.  Currently, the NBA is in the midst of their playoffs, and as it stands the Atlanta Hawks are playing against the Cleveland Cavaliers.  The jury is still out, but this could pose some complications for someone like me, hoping to be able to hop on flights to and from Cleveland from Atlanta.

But then I saw that the series currently sits at 3-0 in a best of seven, in favor of the Cavs, with game 4 tonight, so there’s a good chance that the Hawks will continue their outstanding tradition of choking, as well as the Atlanta tradition of falling short of a championship, regardless of sport.

However, that’s not what really prompted me to write today.  It’s what’s happening in the Western conference that caught my eye, and made me think, “hmm, really??”

The Golden State Warriors are a win away from the NBA Finals, and as the team with the best record in the NBA outright, stands a good chance of going all the way.

And this is where I show my age a little bit and reminisce about how this is somewhat interesting to me, because in the time in which I did follow the NBA and loved basketball above all other sports, this is basically what I recall of the Golden State Warriors:

Basically, the Warriors were the laughing stock of the NBA.  Asking an NBA fan how many teams there were in California, would usually prompt the answer of “three,” because everyone knows the two Los Angeles teams, and some people often said “Oh yeah, the Sacramento Kings,” but most everyone forgot about the Golden State Warriors.  Sure, being named after the state’s nickname, and not necessarily Oakland, where they’re actually located didn’t help with that, but the fact of the matter is that people often times don’t remember the team that was so lousy and terrible.

It didn’t matter that the Warriors had some really good talent back in those ages, like Chris Mullin, Tim Hardaway and Chris Webber, they just weren’t ever any good.  Whether it be injuries, a sheer inability to function as a cohesive unit, or just players underperforming, the Warriors were simply no good.  They had more notoriety when Latrell Sprewell choked their own coach in 1997, but then lost all of it, when they won just 19 games out of 82 played.

Out of 41 home games, the team literally had a chance to win like, eight of them.  Imagine being a season ticket holder, and like every single game that was attended ended up as a loss?  That’s the kind of shit that happens where you throw yourself off the Golden Gate Bridge, or at least stop liking sports outright.

Back to present day though, the Golden State Warriors are far from those pathetic cries of the past.  They’re on the doorstep of the NBA Finals, and even though the Cavaliers have LeBron James out to prove his legacy, the Warriors are far and beyond the superior team, and should for the most part win the championship.

But my, how the times have changed in the NBA, where the Golden State Warriors are championship contenders, when they used to be a team where they only contention they had was getting that #1 draft pick every summer.  Funny how things turn out on long enough of timelines.