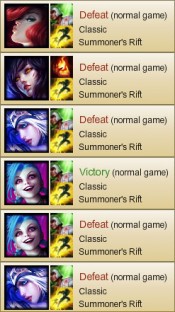 The following graphic is my last six games. You might notice that they are mostly defeats. You might also notice that they are also Summoner’s Rift games. I do not play a lot of Summoner’s Rift games these days; I typically play a lot of All-Random-All-Mid (ARAM) games with my girlfriend, because they’re quicker, and the random player select for all participants absolves all players of such nagging details like responsibility and skill, and sometimes they’re tremendously fun when you and/or other players get to play a little mad scientist with how to build out a character for varying results.

Summoner’s Rift games are typically way longer, and play to what’s known as a “meta,” basically meaning a traditionally accepted form in which the game should be played, with specific positions, roles, and styles that is expected of those players designated to each role. Personally, I feel that playing games to a style because that’s what’s expected is kind of stale, boring, and tedious.

Summoner’s Rift games are also what is played on the professional level, so the alleged millions and millions of League of Legends’ player base are playing the exact same game that kids all around the globe are paid serious money to do so.

The following graphic is a reminder of why I really don’t care to play Summoner’s Rift games, and play way more ARAM.

It’s not the defeats that bother me; nobody plays LoL and expects to win every single game. Everyone who plays has lost hundreds and hundreds of times, it’s just that I’m fortunate to be able to say that I’ve won more than I’ve lost, although both numbers are well into numerous hundreds. But it’s how the defeats that happen, that really make me think about how awful the game really is capable of being, and why I am not thrilled about playing a game where teamwork becomes impossible, and it turns into the bathroom’s armpit of shit before the inevitable defeat happens.

In every one of these six games, the end result was basically because someone on the losing team imploded, and then the rest of the team fell apart, because only in very, very rare cases, can a short-handed team defeat a full team of five, regardless of skill level, and most times the shorthanded team will inevitably lose.

But in every single one of these games, a player(s) on the losing team became unhappy with the play of themselves, which naturally turns into dismay for their teammates’ play, and then the frustration turns into words, and then words become a firing squad, and then a loss occurs. Sometimes, the discontented players deliberately let themselves die to the enemy team (intentional “feeding”), and sometimes they just give up, and either quit the game, or just simply stop playing, content to have their character sit at base, while they banter back and forth with whomever will listen to them.

Every one of these games had one of these toxic players in it. Even the one game that I did manage to pull a victory out of, my team had a player that decided that they didn’t agree with a decision I made in the game, and decided to begin cussing me out. Naturally, I put them on mute, because I think it’s counterproductive to even try and reason with that kind of trash, but we still won the game, I turned in my report for them, and we were on our merry way.

It’s the last game that boiled me over that caused this post to take shape, because it was a game that we were most definitely in, but they had decided that one enemy member had grown too “tanky” (physically resilient with a ton of hit points), and that we were done for, and that we should throw in the towel. Naturally, their teammates disagreed, and refused to surrender the game, but because they decided that one opponent was too tanky, the game was over. We even tried to plead and stroke their ego, and tell them that they were doing great, and that we needed them, but to no avail. The 5 versus 4 eventually became too much, and we lost.

The bottom line is, when people say they hate League of Legends, I’d be a wagering man and say that probably 95% of those times, they’re really wanting to say that they hate League of Legends’ player base. The player base of the game is full of the most narcissistic, self-important, entitled, unable to take accountability, trolls on the face of the planet. On the face of the planet. With a game that boasts player numbers in the millions, that isn’t a far stretch from the truth. Combined with the anonymity of not having to face your fellow players, people become absolutely insufferably miserable.

It’s not often that I will voice my displeasure to other players in game, but prior to the loss, I told this white-flag bearing player on our team, that their willingness to give up on a completely winnable game was akin to that if they ever contracted herpes, they may as well jump off a cliff and kill themselves, because “it’s over.”

I really would like to get back into playing Summoner’s Rift, because I genuinely do like the game, but it’s times like this, where I get paired up with miserable fucks over and over again that really makes me reconsider wanting to play the game outright sometimes.

For a game that boasts as much success on a global level as League of Legends does, they should really take a page out of World of Warcraft’s book, and basically start boasting when their player ban numbers start reaching into the tens of thousands, because as far as League of Legends is concerned, if they have a billion registered users, the number of people who should probably be banned for detrimental conduct should be easily within the millions.

The game is good, but the people playing the game, most certainly are not always. Often times, they’re the polar opposite of anything positive.