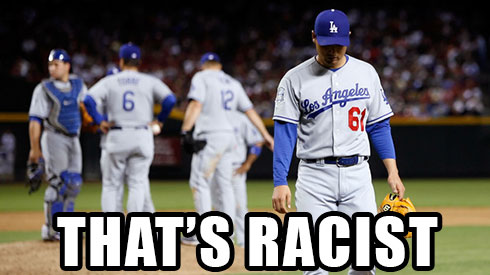 Let’s be clear here, in no way do I feel that Chan Ho Park is worthy of being enshrined in the National Baseball Hall of Fame (HOF) based on his statistical numbers.  No, I love Chan Ho Park since he’s a Korean guy playing my favorite sport, but it doesn’t change the fact that he wasn’t exactly Greg Maddux or Randy Johnson legendary, and doesn’t have the statistical achievements in order to make it in.

In that regard, the HOF is at least consistent on its demand that only the truly best players get in, and they weigh statistical evidence above pretty much everything else.  However, small as they may be, there are some other variables that are considered when it comes to players’ chances at Cooperstown; otherwise Roger Clemens, Barry Bonds, Mark McGwire and Sammy Sosa would all already be in the HOF, but their connections with performance-enhancing drugs have basically black-listed them and their gaudy career numbers from enshrinement, as long as ultimately, old-thinking baseball writers association of America (BBWAA) are in charge of keeping the gates.

Basically, it’s established that getting into the HOF is tremendously hard, and that in most cases, truly only the best of the best successfully make it into Cooperstown.  As a result of this, it’s simply become an honor within the baseball community to have just been put on the ballot at all, because at least by being on the ballot, a player’s career can be somewhat recognized.  Being put on the ballot also means that variables that aren’t just statistics can be considered and at least acknowledged, because when the day is over, not every single important variable is tangibly measurable by numbers.

Take for example, Hideo Nomo, who was on the ballot in 2014.  Ultimately, Nomo is a widely remembered name in the history of the game, because he was a Japanese pitcher with a funky delivery that enjoyed a modicum of success throughout the duration of his career.  He would never be as good as Greg Maddux who made it into the Hall in ’14, nor was he remotely as good as Mike Mussina, who failed to get in that same year.

However, Hideo Nomo was on the ballot, and it’s pretty obvious it’s solely based on the non-tangible fact that he was simply a massive keystone, an ambassador of sorts, that bridged the cultural divide between baseball in America and baseball in Japan.  Hideo Nomo wasn’t the first Japanese man to play in MLB, but he was easily one of the most influential ones, who captured the imagination of a nation and exposed them to MLB, and ultimately served as a prime example that the Japanese could succeed in America.

It goes without saying that without the successes of a guy like Hideo Nomo, America might never have seen the influx of Japanese pitchers, some of whom have been key contributors on championship teams.  Koji Uehara, Daisuke Matsuzaka, Junichi Tazawa, Akinori Otsuka, Kenshin Kawakami, Hiroki Kuroda, Masahiro Tanaka, to name just a few.  Needless to say, in spite of Nomo’s harsh criticism of Japanese culture, he’s still perceived as somewhat of an icon, and a pioneer of elevating both the skill and perception of Japanese baseball to the rest of the world.

Ultimately, Hideo Nomo wouldn’t even receive enough votes to keep his name on the ballot for another year; but the fact of the matter is that Hideo Nomo can at least be able to attest that he was actually mentioned on the ballot at all, for baseball’s most hallowed grounds.

Unfortunately, this is something that Chan Ho Park will not be able to do, as for whatever reasons, other than the fact that the BBWAA is racist, ignorant, just plain doesn’t respect Koreans or all of the above.

Seriously, take all of the aforementioned paragraphs about Hideo Nomo, and replace Nomo’s name with Park’s.  I mean, it’s basically the exact same story all over again, and they both started their journeys with the Los Angeles Dodgers.  Replace all the Japanese names with Korean ones, like Hyun-Jin Ryu, Shin-Soo Choo, Jung-Ho Kang and Jung-Keun Bong to name a few.

Statistically, Park was probably not as good as Nomo’s entire body of work was, but not to the point where Nomo should get on while Park doesn’t.  Especially when looking at the ballots, players vastly inferior to both guys manage to warrant placement, like Aaron Boone, Eddie Guadardo and Brad Ausmus.  Neither of those guys were better than Chan Ho Park, nor did they inspire an entire country to want to follow in their footsteps.

The bottom line is that it is bullshit that Chan Ho Park was left off of the 2016 HOF ballot.  Sure, I’ll concede that he doesn’t even come close to warranting induction into the HOF, but at least give him the fucking ballot, where his importance to the game can at least be thought about.  There’s little reason to believe that this omission is either a severe lack of respect for Korean talent, or just outright racism.  Maybe both; based on what Pedro Martinez mentioned in his speech last year, it does seem a little bit surreptitious, the lack of Latino baseball players in the HOF, considering nearly 30% of MLB’s player rosters are Latino.