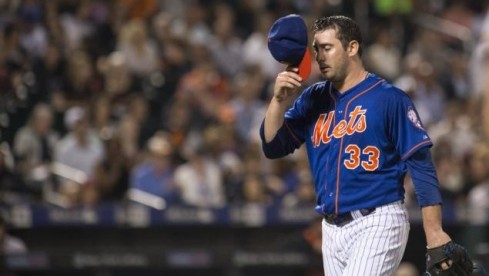 You know what I think is stupid?  How sports media insists that the nickname for the Mets’ Matt Harvey is “The Dark Knight.”

I get it, he plays in New York, which is alternatively known by nerds as the de facto Gotham City, and doing heroic things like playing a kids game very well warrants being called “a hero;” therefore being “a hero” in “Gotham City” is basically Batman AKA The Dark Knight.  We get it, media.  So very clever.

However, let’s be real here.  Matt Harvey plays for the Mets, who play in Queens, which is outside the borough of Manhattan, which is probably more of what Gotham City kind of is supposed to represent.  No matter what happens, the Mets are always going to be the little brother of the Yankees, the second-in-line team playing in a second-in-line neighborhood to New York City; so it’s almost more appropriate to say that Matt Harvey is more like Robin, the second-in-command to Batman.

Not to mention the Mets’ colors of blue and orange don’t exactly resonate well with comparisons to Batman’s black, more black, and some nearly-black-like shades of gray.  Blue and orange are actual colors, which is again, closer to Robin, who actually has colors in his outfit.

The bottom line is that it’s stupid that Matt Harvey is so often referred to as The Dark Knight, when I’ve basically just given several unbiased (totally biased) reasons to why he probably shouldn’t.

So if Matt Harvey shouldn’t be The Dark Knight, who should?

But there’s no way the media would give a foreign player, let alone a Japanese player like Tanaka have a cool name like The Dark Knight.  Who cares if Tanaka actually played for the Gotham City Yankees, and was having a better rookie year than Harvey did, the name was already anointed to a bum like Harvey, and there’s no takebacks.

The bottom line is that calling Matt Harvey The Dark Knight is about as cool as your own parents dabbing or using hashtags in commonplace dialogue.  Just because Harvey pitches for a team that resides in the state of New York doesn’t automatically mean it’s Gotham City, and imagine if the association was reversed, and Batman was given the Mets’ color palette instead of the Yankees?  Yeah, that’d look pretty fucking gay, seeing a blue and orange Batman.

For the love of god, I’d plead that Matt Harvey cease to be called The Dark Knight, but that’s not going to happen until he starts sucking.  And since he’s on the Mets, I’m hoping for it to happen sooner rather than later.