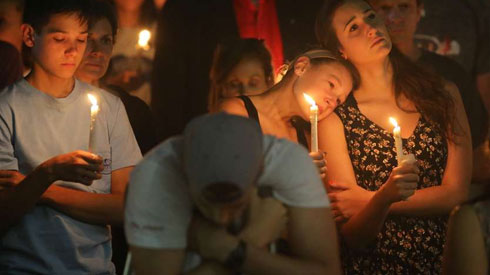 I’ve been out of touch.  To no surprise.  Heck, even at the time I’m writing this, my brog is still down, en route to its new home, and I’ve been dealing with varying degrees of separation anxiety with my greatest and longest-tenured hobby, but the point remains, I’ve been out of touch with day-to-day current events, and struggling to find time or want to continue writing, without my platform.  And this is the first of many topics that I’m trying to use to jumpstart my writing muscles, and hope for the best.

Anyway, I was going into work one day, and I couldn’t help but notice that there were a few notable buildings that I see on the drive, that had their flags at half-mast.  Clearly, something had happened, and I grew curious to what major event could have happened to have made the decision to go flags at half-mast was.

I got into the office, and I took a few minutes to look on CNN, to see if there was anything major that happened somewhere in the world; nothing.  Perhaps it was at a more local magnitude, something that happened in the state, that is making just Georgians fly Old Glory at half-mast?  So in spite of my endless criticism towards the Atlanta Journal-Constitution, I still went on AJC, because criticism aside, they’re fairly up-to-date on things.

Bingo, I see a candlelight vigil.  Surely, there has been some massive tragedy in the state to cause people to somberly conglomerate and stand in silent vigil towards presumably the recently departed.  And then I read the story:

Four University of Georgia college girls dead after crashing into another car.  The two drivers of both vehicles survived, but with injuries, but four passengers in one of the cars, dead.

Weather conditions at the time of the collision, which happened around 8:55 p.m., were listed as “clear” in the report, and the roadway was said to be dry.

The incident report said that alcohol and drug tests were not given at the scene. Officials have previously stated that drugs and alcohol are not suspected in the crash.

Although officials have claimed to rule out that drugs or alcohol were not a factor in the accident, it doesn’t take a genius to realize that in a car with five girls ranging from 19-21 years of age, “distracted” kind of goes without saying.  I’m going to assume SnapChat, selfie-taking, or a combination of both were involved in this incident, if drugs and/or alcohol really were not involved, which I kind of don’t believe, because UGA is one of the drunkest schools on the planet to begin with.

Getting back to the point though:

To honor the crash victims, Gov. Nathan Deal ordered all flags be flown at half-staff, Deal’s office posted on Twitter.

“Today, we are all Bulldogs,” he said.

Yes, it’s a sad and unfortunate tragedy that lives were lost in this incident.  In no way shape or form is it ever a good thing to hear that people died from anything other than old age and/or natural expiration.  But I couldn’t help but think to myself, with a wince on my face, was it really that tragic, to the point to suggest a statewide flying of flags at half-mast?

I mean, when a president, past or present dies, I can get a half-mast.  When a public figure that actually did something substantial in the world, I can understand half-mast.  But four college girls dying, and then the state reacting like September 11th happened?

I’m wincing again, but I kind of don’t agree.

Especially when not even a full month prior to this incident, there was another incident, where a crash occurred on I-85 in Coweta County that left three people dead and four hospitalized.  Bad weather was a factor in this incident, as well as people not wearing their seatbelts.

If there were any candlelit vigils, they went unknown and the AJC didn’t bother to find out.  Nathan Deal didn’t send a memo out after this incident, to raise flags to half-mast in honor of the Wilson family, whom yes were all relatives in the accident.  There was no day in which we were all Wilsons.  And weeks afterward, there’s been no follow up stories or articles about the incident.

The difference between this incident and the one involving the UGA students?

You’ll never believe it, but the UGA students were all white, and the Coweta County crash victims were all black.

Honestly, there’s really nothing more to say about it, when you take a few steps back and see patterns like this.