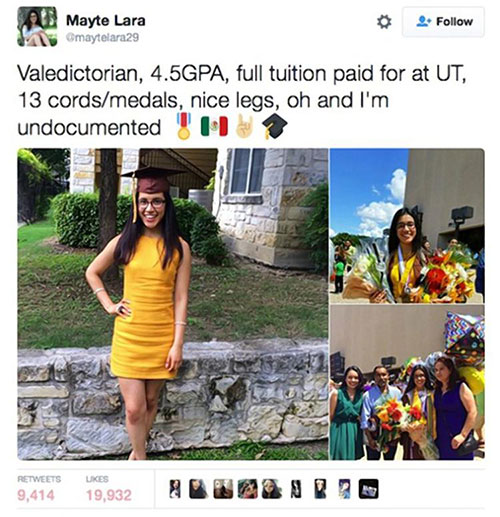 TL;DR –  Texas high schooler brags about all her accomplishments in spite of being an undocumented resident, internet explodes.

Either this broad is a sad representation of what a valedictorian today is, or the bar at Crockett High is really, really low.  Because behavior like this is pretty stupid and foolish, and those are typically decisions people don’t expect from valedictorians, often perceived to be the smartest student in the graduating class.

Or perhaps vapid, narcissistic bragging on social media is just so commonplace today, that even those who are expected to be intelligent are not immune to the temptation to do it as well.

A 4.5 GPA is impressive, undoubtedly, but without any context, the achievement could also be hollow.  How many AP classes?  Or was it a curriculum full of cush classes and basic-level necessities?  That’s what’s convenient about Twitter; the character count often makes it impossible to provide context, and people simply don’t have the attention span to inquire about it.

Full tuition at Texas?  Congratulations on getting into a football school.  Texas is a perfectly fine school yeah, but the valedictorian in my high school graduating class went to Harvard.  Texas isn’t really known for anything other than boasting a litany of generic curriculum that really amounts to teaching children how to learn; I mean when research is listed as one of their strong points, but fails to be mentioned in the same breath as like MIT or Berkley.  Getting into college in the first place is debatable achievement, but a school like Texas, if you’re not going to feed the football cash cow, then there’s really not much to boast about.

oh and I’m undocumented – wait, is this something that people brag about now?  When I was in the 8th grade, I remember we read a book in our civics class called Lupita Mañana, which was a story about a little girl and her brother who were sent by their parents to sneak in to the United States, to enjoy the life of luxury and wealth that their uncle and his family achieved.  Except when they reconnected, it turned out that they were lying and were actually living a life of labor and on perpetual high alert for la migra, or INS; spoiler-alert, Lupita’s brother gets caught and deported, when he gets a little too cozy in America and lets his guard down one day.

Well, I’m not entirely sure what this girl was trying to accomplish by bragging about her being an undocumented resident.  This immediately implicates any members of her family that weren’t born on U.S. soil as also being undocumented.  And back in the day “undocumented resident” had another name, diluted by the age of PC and everyone trying too hard to be nice to everyone – illegal immigrant.  Emphasis on the phrase “illegal.”

If her family had been able to discreetly reside in the United States without documentation for as long as it took for their daughter to become a narcissistic, albeit fairly well educated American without much scrutiny, those days are probably over.  Especially in today’s Donald Trump-brainwashed society that’s become super hyper sensitive towards the idea of illegal immigration, especially to Hispanics.  But with one self-aggrandizing tweet, not only has this girl outed herself, but her entire family as undocumented residents, and prone to some good ol’ fashioned American xenophobic scrutiny.

The funny thing is that according to the state of Texas, she will have to provide an affidavit stating that she will apply to become a documented resident as soon as she is eligible:

Provide the institution an affidavit stating that they will file an application to become a U.S. permanent resident as soon as they are eligible to do so.

Again, given the fact that she and her family have lived in Texas long enough for her to become a narcissistic American, I’d wager a guess that they’ve long been eligible to become permanent residents, but just never did so.  After all, although it’s hotly debated these days, all permanent residents are subject the most niggling drawback of citizenship: taxes.  Whereas, depending on where you inquire with, not all undocumented residents pay as much, if any, taxes as those who are residing legally.

No matter, thanks to Little Miss Vapid Valedictorian, she and her family just might face a little bit more scrutiny than they would have, had she not had the compulsion to Twitter-vomit like so many kids have to these days.  The University of Texas is going to expect her to, and if her family wants to continue to live in the United States, maybe they should be expected to as well.

Speaking of vapid, the reason I keep using the word “vapid,” is also the reason why this whole came to be: (I have) nice legs.  It’s obvious that the mention of her legs in her already insufferably self-aggrandizing tweet were shoe-horned in for absolutely zero additional reason other than to push her shit over the top in how arrogantly vapid it could be.

What in the holy fuck does this dumb undocumented girl’s legs have to do with her academic achievements? I’ll bite, and admit that it was one thing that pushed me over the edge to how I felt about this whole incident, resulting in a 1,000 words of criticism, but 1,000 words no less.  I apparently have a very low tolerance for arrogance and vanity, and whether it was intentional or not, I refuse to give this girl any credit for succeeding at going viral for the wrong reasons.

Either way, we can congratulate this girl on being a valedictorian and getting a free ride into a state college, regardless of context.  However, it doesn’t change the fact that her narcissism and arrogance have not only succeeded at making her appear more superficial than she may or may not be, but it also brought a little bit of scrutiny towards herself and her family of something that frankly I didn’t think people would really want to be bragging about.

It would be ironic if all this resulted in some overzealous Trump supporters with la migra connections took some unfortunate action as a result of this kind of exposure, all because an arrogant teenager couldn’t help herself to brag about all of her high school achievements, especially her legs.

*They are from practicing Tae Kwon Do, and for completing a large variety of mud runs.  I like them all, but there’s no denying that they are basically glorified participation awards that everyone else received.  Context!