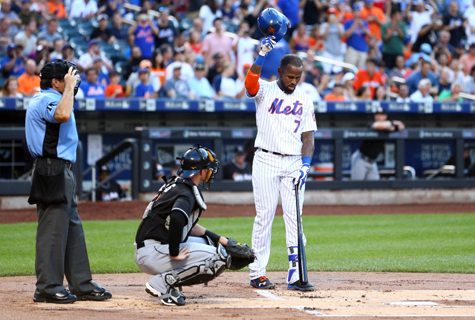 Why you so dumb?  Accused wife beater, Jose Reyes, given standing ovation and warm reception by fans at Citi Field in his first game back with the Mets.

Don’t get me wrong, I understand fully why there are Mets fans that love Jose Reyes.  Between 2006-2012, he was easily the most frighteningly good shortstop in the game.  He hit .300 from both sides of the plate, he was always a threat for extra-bases, and if he got on base, stolen bases weren’t a threat, they were expected.  His speed was unmatched, and his range at shortstop was maddening as an opposing fan, when Reyes managed to somehow be absolutely anywhere the ball was hit.

Jose Reyes was unmistakably the most exciting player in baseball for a great part of his time with the Mets.  It’s easily understandable why Mets fans loved, and still have positive connotations with him.

However it’s been a long time since 2012, when Jose Reyes won the batting title while on the Mets, before proclaiming his love for New York and then immediately signed a deal with the Miami Marlins, took his talents to South Beach, got traded to Toronto before getting traded to Colorado.  Along that journey, he (allegedly but really did) beat the shit out of his wife in Hawaii, which ultimately led to him getting suspended by Major League Baseball, and cut by the Rockies. And since the Mets have no faith in crybaby Wilmer Flores and are reliant on Asdrubal Cabrera to play shortstop, and David Wright hasn’t been close to healthy since 2014, they decided to bring the prodigal son back to where his career started.

And the fans cheered.  For a guy who was once great on the Mets.  For a guy who was available solely because he (allegedly but really did) beat the shit out of his wife and his former team wanted to distance themselves from such a character.  But they cheered anyway, in Citi Field, because he used to be good at the game of baseball once upon a time.  Not just cheered, they stood, and gave him the pinnacle of fan appreciation.  A standing ovation, and on top of that, his old “Jose, Jose-Jose-Joseee” chant.

Sorry, I don’t agree with that, one bit.  Jose Reyes is a wife beater, which means Jose Reyes is a piece of shit.  I don’t agree with cheering for, much less giving standing ovations to wife beaters, or pieces of shit.  I get that Mets fans have a lingering appreciation for what he did on the baseball field, but a baseball player is still a temporary occupation of a man, but being a man is still a full-time gig.  And once he strikes a woman, much less his wife, he’s failing at being a man.  That, does not deserve appreciation of any sort.

This may sound a little hypocritical, considering that I have been on the record stating Chris Benoit should not be stricken from the history annals of professional wrestling, because of the murder-suicide of his wife and child.  Yes, I firmly stand on my belief that Chris Benoit was indeed a most talented wrestler, one whose body of professional work I appreciated and enjoyed a great deal.  But I still stand strong on the stance that once he went off the handle and killed his wife and son, he became a piece of shit, no longer worthy of any sort of praise.

If he didn’t kill himself, and somehow managed to avoid prison, and resume his career as a wrestler, and I were in attendance at a live event, and Chris Benoit came out, I wouldn’t cheer for him, because I once thought his wrestling career was awesome.  I just don’t believe you cheer for pieces of shit that were once men.

Additionally, I’ll add that former legendary Braves manager, Bobby Cox was once implicated in domestic abuse; had his wife not vehemently denied all wrong-doing, I’d be the first to admit that it would be really, really uncomfortable and deplorable to witness the love Bobby got from Braves fans throughout the remainder of his career.

And I don’t think Jose Reyes is worthy of any sort of applause or ovation.  And I think anyone who does, is being stupid, and needs to learn how to separate the game of baseball from the game of life.

When the day is over, it really doesn’t matter what the Mets do.  1986 be damned, and any other future World Series championships will always be secondary to the list of dumb shit the franchise has been known for, like Bobby Bonilla (happy belated Bobby Bo-day, btw!), the Wilpons involvement in a Ponzi scheme, David Wright’s concussion-proof helmet, and their fans giving standing ovations to a known wife-beater.

Unfortunately, the latter isn’t even worthy of the infamous “LOL Mets” designation, because domestic abuse isn’t something that’s particularly funny.  But because baseball is a cutthroat business that’s more about making money than doing the right thing, Jose Reyes is employed and making millions of dollars, until his contract expires, or he grows a conscience and retires and forfeits his deal (which won’t happen) despite the fact that he’s a (alleged, but really is) wife beater.