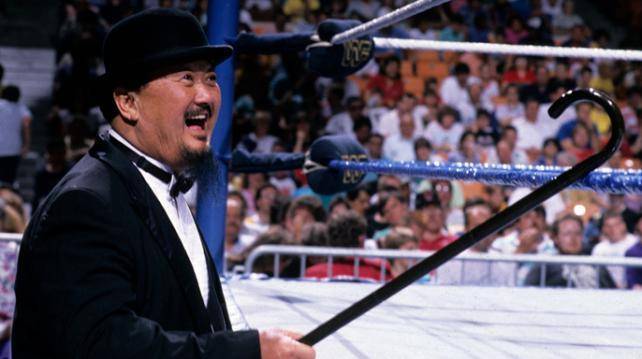 In memoriam: Harry Fujiwara AKA Mr. Fuji dies at the age of 82 years old

I’ll be honest, I didn’t really care that much when Paul Bearer died.  Sure, he was a memorable personality in the wrestling industry, who had the luxury of being associated with one of the greatest of all times in The Undertaker, but let’s be real here, he wasn’t really that interesting of a guy to me.  He spoke in a ghostly voice and was visually memorable, but he never got his hands dirty, he rarely took bumps, and really, he only managed three guys ever, Kane and Mankind on top of the Undertaker.

But Mr. Fuji passing, that elicits actual downer emotions within me.  Mr. Fuji was undoubtedly on the Mount Rushmore of classically heel managers, along with Bobby Heenan, Jimmy Hart and the Slickster.  Mr. Fuji was a guy that was memorable for all the reasons, right and wrong, whether it was because he was a walking caricature of Japanese stereotypes, with his Uncle Tom suit and bad guy bowler hat, or the fact that when you look at the guys he managed, he certainly managed his share of actual champions.

Once an active wrestler at a time before I was even born, I didn’t have the privilege of seeing him wrestle guys like Gorilla Monsoon, another superstar that I didn’t realize was a wrestler before they were the personalities I saw on television when I was getting into wrestling, Mr. Fuji was a very decorated performer, having won numerous titles from the times when wrestling was a territorial endeavor.  Mind you also, this was during eras in which racism was still very rampant, Mr. Fuji still won numerous titles in various NWA territories, as well as Georgia Championship Wrestling, the American Wrestling Alliance, and even several stints with the WWF Tag Team titles, the very same titles that are currently being held by The New Day.

But the Mr. Fuji I will always remember, was the evil Japanese manager in the ironic villain suit and the bowler, who managed guys like the Orient Express when I was cheering for The Rockers, Demolition when I was cheering for The Hart Foundation, and even weirder guys like the Berzerker, who said “huss” every second of every match and bashed the Undertaker 50 times with his shield and tried to stab him with a sword.

Mr. Fuji was always on the opposite side of who I was cheering for when I was a kid, and when I thought wrestling was real, I would be livid, whenever Fuji would grab a leg, or take a swat with his cane, and the heels would get away with it.  I especially remember Wrestlemania VII, where a Mr. Fuji-led Demolition would have a match against Tenryu and Kitao, where Bobby Heenan was going out of his mind on commentary, especially when Mr. Fuji whacked one of the opponents with his cane, eliciting a remark that “Mr. Fuji didn’t care about attacking his own countrymen.”  Although Demolition would lose the match, this was one of the most memorable Mr. Fuji memories that I can recall to this day.

And of course, let us not forget Mr. Fuji’s probable greatest managerial run, with Yokozuna, winning World championships over Bret Hart and even the immortal Hulk Hogan.  As a manager, this was Mr. Fuji’s most glorious run, running around in a yukata, throwing salt into eyes left and right.  It was a far cry from the old villain outfit and bowler, but it was nice to see Mr. Fuji running with the world title for a little bit.

Eventually, I grew up, learned wrestling was scripted, and came to my own conclusion that heels have all the fun.  Mr. Fuji was the furthest thing from the evil villain I thought of him as a child, and was instead an icon of a golden age of wrestling, as well as an ironic symbol of just how fucked up funny the wrestling industry could be.

Ultimately, he was a bonafide Hall of Famer in an industry of make-believe where HOF designations are kind of given out in a formula; Mr. Fuji was a worthy induction during a time when Jacqueline, the Godfather and the Bushwackers manage to get in.

The passing of Mr. Fuji is like yet another small passing of my childhood.  Never again, in a spineless, PC world, will we ever see another caricature of a stereotype be portrayed on wrestling television again, and I’ll be surprised if we even manage to get a cheap heel win via salt in the eyes ever again.

Rest in peace, Mr. Fuji.  There are plenty of heels in the afterlife who would undoubtedly benefit from your tutelage for the rest of eternity.