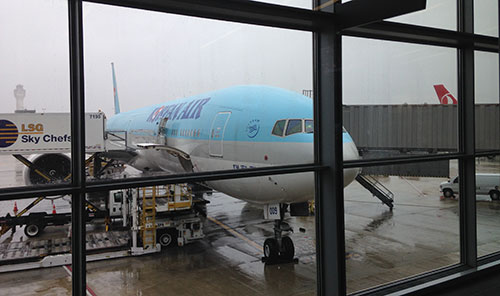 Normally, I don’t often state my travel plans, fearing for jinxes or security vulnerabilities involving my home or belongings.  But lack of brog, etc, etc, no worries about anyone reading this until way after the fact.

But I’m going to Korea in a few days, and I’m undoubtedly excited to visit the Motherland, but at the same time I feel a tremendous amount of anxiety and concern for the home I’m leaving behind while I’m on travel.  Some of them are valid things to worry about while I’m away like my outstanding assignments are in good places for my co-workers, the health and well-being of those I care about, the safety of my home and my dog.  Or the perpetually escalating tensions between North and South Korea and the United States’ involvement, leading to some military firepower demonstrations from all sides this fucking week of all times, seem like something to fret a little bit about.

Some are less valid, like that I’m perpetually forgetting something, and no matter if I make lists, check and recheck the things I’m packing, I always feel like I’m forgetting something.  I mean, all I really need is clothes, toiletries, my passport, comfortable footwear, cell phone and my camera, and I should be mostly all set.  But I stare into my suitcase, and I’m 100% convinced that something critical and important is being forgotten, and it’s going to drive me nuts until I’m at the point where it would be too late anyway.

But the most irrational of anxieties I feel, is the feeling of FOMO (fear of missing out) of all the things that will inevitably be happening in the States while I’m away.  Like, I’m going to Korea, and visiting the country where my parents are from; I’m going to see all sorts of new and amazing things, historical, cultural and whatnot, and there’s a part of me that’s butthurt because I won’t be able to indulge in television shows like American Horror Story or Luke Cage when they’re fresh and new, and I’ll be two weeks behind when I get the opportunity to indulge.

However, I can’t really help it.  Being abroad is undoubtedly an amazing experience that I’m sure I will not regret one bit, but at the same time, it gives me a feeling of being away from my people, unable to indulge in the same things, current and fresh, as all my peers.

Like, I’ll be missing out on watching the start of Worlds with mythical gf; but I will be in Korea, where League of Legends is pretty much one of the nation’s primary sports.  Speaking of sports, I’ll be missing out on the Braves’ last games at Turner Field, and most of the baseball playoffs while I’m still abroad, which isn’t that important to me considering the Braves have already failed to lose 100 games, but not having the option, is not appealing.

It’s stupid and irrational, I’m very much aware, but it’s something I can’t deny that I feel.  It’s somewhat nice to enjoy similar things as those around me, when they are, and when I put myself into a position where I don’t even have the option, it kind of irks at me.  Like the packing, this is inevitably a concern that vanishes once I’m on the vacation, but whenever I do look at stuff on like Facebook, then it’s a reminder of the things I’m missing back home.

Whatever though, this isn’t to say that I’m not excited about Korea.  I am enthralled with the idea of seeing Seoul, and it’s blend of historical monuments as well as their obsession with shopping centers.  I want to go to places that look like I’m in another country.  I want to find nationalistic clothing that I can obnoxiously brandish back in the States that have shit like “KOREA” in big blocky letters or some shit.  And as silly as it sounds, I’m actually really curious to see if I can play League on the Korean server, to see just how badly I’d get shit on by actual Koreans playing in Korea.

And food, I want to eat all the Korean food.  I know Seoul has a shit ton of food not foreign to Korea like TGI Fridays and other shitty chains from other countries.  I want none of that shit.  I want orange-hued jigaes from dirt-floor wooden shacks that look like the poverty dramas that my grandma used to watch for endless hours on stacks of VHS tapes, that pissed me off that I couldn’t play Nintendo while she watched.

Ultimately though, this is a trip that I’m making with my mother that is long overdue, and one of those things that I’m grateful for the opportunity to do, before it can’t be done.  All anxieties aside, this is something that I will have no regrets about, and that I’m glad that I’m going to be able to get to do, regardless of whatever stresses and concerns I have on the home front.  I will miss everyone that matters something to me while I’m away, but I’m going to do my best to not worry about them while I’m away.