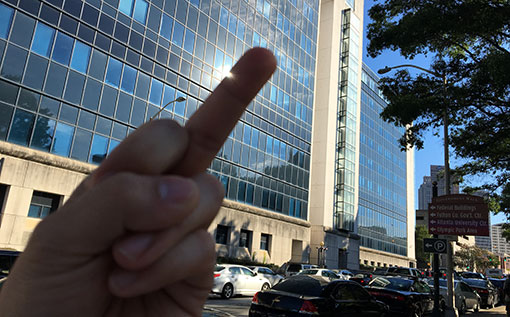 When it comes to moving, there’s no shortage of niggling little loose ends that seem to permeate from the furthest and most obscure sources.  My own move was no exception to the rule, and no matter how comprehensive and thorough I thought I was being, for weeks and months after departure, there were always letters, notifications, and things showing up to my apartment that were unexpected, that needed to be addressed.

To be fair, there was a surprising amount of money owed back to me from various sources, which was always welcome and pleasing, but there were the usual share of expenditures, final payments, and other nuisances that showed up and had to be dealt with, like good citizens do.

However, one thing that showed up, way later than everything else, was like one final fuck you from Fulton County; everyone’s favorite civil obligation in the world, jury duty.  Naturally, this was met with the enthusiasm of having your dick placed on an anvil and beaten down with a hammer, and absolutely minus-fifty parts of me wanted to deal with it.

I lived in Fulton County for 13 years, and was summoned for jury duty six times.  Once every eligible two years.  Anyone who tells you the selection process is random and unbiased is completely full of shit, because it’s entirely based on demographics, and Asian male property owners in my neck of the woods is an extremely shallow pool that saw my name get drawn at a guaranteed rate every two years, even if I had just managed to unload said property and no longer lived in the county.

So of course, I looked for any way possible to get out of having to report for jury duty, because I would rather give myself an enema over having to waste an entire day sitting in a room full of other miserable Fulton County citizens also wishing they were absolutely anywhere else than the holding pen.

The easiest course of action was the simple fact that I was no longer a resident of Fulton County.  I mailed them two proofs of utility bills along with my questionnaire, and hoped that I would receive some sort of confirmation, notification or smoke signals that I would be off the hook from having to report.  Naturally, I received nothing of the sort, so I had hoped that the automated phone number that all jurors are required to call the night prior would yield better results, but of course not, my group was required to report the following morning.

So in spite of my best and entirely legitimate efforts, I woke up early, trudged back into the City of Atlanta, and went through the whole fuckin song and dance of parking, riding shuttles, waiting in lines, going through security, waiting in more lines, until I finally got to the juror check-in.

Where they promptly confirmed that I did not live in Fulton County and dismissed me.

Now, I’m glad that I didn’t have to waste the entire day in the holding pen as I had several times prior, but I’m also aggravated and annoyed that the county has no means of contacting people like me that we don’t have to waste our valuable time and even show up.  It’s hypocritical to say that because of the sheer volume, they don’t have the time to do something so simple, yet it’s entirely acceptable for them to waste our time to make accommodations to show up to something nobody wants to do, only to send us off.

Thank goodness that this will be the last time that I have to deal with this bullshit, and that as long as I never move back into Fulton County, I won’t have to come back to this shithole to do my civic duty ever again.