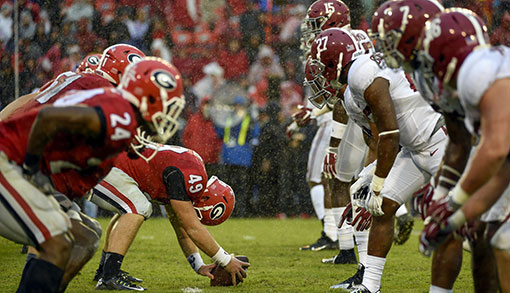 It’s supposed to rain today, and was scheduled to have already started and turned the city into an icy catastrophe but surprising nobody such has yet to occur.  It was actually a rather clear and pleasant morning drive into work today in fact.  But if it ever does rain and the extra low temperatures we’ve been getting over the last week take hold of it, it could lead to some inconveniences to people like me who, work jobs and drives to and from them.

Also, the president has also decided to grace the city with his presence for this momentous occasion, because there’s no secret he can’t resist a scene, regardless of the fact that he’s demonstrated zero interest in any sports other than his own frequent personal golfing habits, and the fact that Atlanta is a city that in all likelihood hates him passionately after he called it “crime-infested” at one point.  It’s still a major, major event with a multiplied hype behind it, and why not go for the trifecta of bombing the city with even more insanity and hoopla than showing up?

Needless to say, in a rare instance of foresight, the vast majority of Atlanta has actually decided to shut down, or at least acknowledge and/or make accommodations for the fact that today is a particularly volatile National Championship Day.  The government has mostly shut down, most companies in the heart of the city have declared half or telecommuniting days, and once Atlanta Public Schools and Fulton County decided to close in light of expected weather and traffic problems, most of the metropolitan counties have followed suit.

It’s times like this I wish I still worked for the state, which was in Midtown, where I would’ve gotten today off.  As well as nearly three times the holidays and vacation time but that’s another story.

Anyway, the original impetus for this post was that I really had intended on just making a quick short post to get in writing my predictions for the game, since unlike the vast majority of people that will be saying things about National Championship Day, I actually care and like college football.

And despite the fact that Georgia is technically the higher seed in the College Football Playoff, they were never the best team going into it.  Alabama may not have won the SEC or had a conference championship this year, but there was little mistake that they were still the best team in the nation all season long.

As much as I would like Georgia to win, because I think not just this city but this entire state is long overdue and tearing their hair out for any sort of championship, and I’d really like to see what happens if they actually get one, I just don’t think they have what it takes to overcome the battle tested tried and true Nick Saban squad.  Don’t get me wrong, this is the best Georgia squad I’ve seen since I moved to the state 15 years ago, and the Chubb/Michel-Bundy running duo is the most exciting thing ever, but Alabama’s defense has been nearly NFL-caliber for a decade, and they’re most definitely going to make this a game decided by quarterbacks.

Jake Fromm might be a wunderkind true freshman, but despite all his success, Jalen Hurts remains criminally underrated, and is cooler than the bag of frozen carrots hidden in the back of the freezer.  Playing in his second straight National Championship game, there’s zero percent chance he’s remotely rattled or phased by the situation and will prevail over his Georgia counterpart.

Although I will be rooting for Georgia, I simply don’t think they’re going to win.  I have no problem if Alabama wins it all, but my heart would rather see Georgia finally bring some victory to the state.