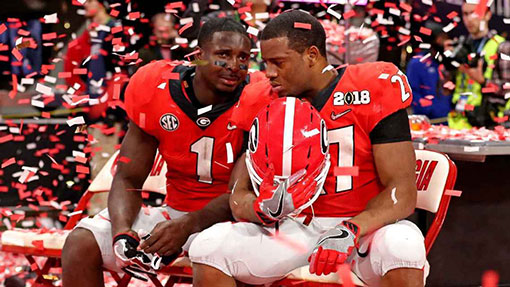 The morning after, I’m a little surprised at how agitated I am by Georgia’s heartbreaking loss to Alabama in the National Championship.  It’s like there’s a part of me that should be satisfied because I was right, and accurately predicted Alabama would win in a low-scoring affair, and the pursuit of being right is the reason why predictions are made in sports.  But then there’s the part of me that still went on record stating that in spite of my prediction, I hoped that Georgia would win, because it sure would be nice to see a sports team in Georgia actually hoist up a championship.

Unfortunately, rooting for sports teams in Georgia is like rooting for the Buffalo Bills in the 90s; no matter how good they might be, they’ll never manage to get over the hump and never be anything better than second best (but also being capable of being absolutely anything well below).

Much like the Atlanta Braves have done countless times in the last 20 years, they failed.  Just like Atlanta United’s soccer team made the playoffs in their inaugural year and filled the city with hope and faith for some accolades, they too choked, losing to a lesser-heralded team, at home no less.  And just like the Atlanta Falcons choked away a 28-3 lead, the Georgia Bulldogs somehow found a way to lose their own championship game.

And it’s that Super Bowl that this game felt eerily identical to, in the way it played out, with Georgia jumping out ahead and holding the lead for the vast majority of the game.  Alabama, much like the Patriots, were pretty inept in the first half, but it’s the second in which legends are born and heroes are made.  Alabama came roaring back in the second half, and before we knew it, the game was tied closing out regulation.  The next thing we know, the team representing Georgia is standing under a deluge of confetti, heads down, as the other team begins celebrating their championship win.

I have no beef with Alabama, and everything about them is pretty awe-inspiring at this point, from the never-ending excellence of Nick Saban, to the story that college football fans are going to hear a LOT of now on, the birth and rise of Tua Tagovailoa, the true freshman with the cannon arm who came off the bench to lead the Crimson Tide back to the glory land.  The freshly-benched Jalen Hurts displayed a level of maturity, class and sportsmanship that couldn’t possibly be expected from a guy who went 25-2 and just got benched in the National Championship but still did, showing how much of a classy man he is.

But damn it, I really wanted Georgia to win this one, because I live in Georgia, and I would love to see some team in my home win a championship, so that many people who also live in Georgia can be happy and feel some sense of victory.  And this is the one that would’ve been perfect to win, because it was played right here in Georgia, in Atlanta, the ESPN-proclaimed Mecca of college football, and it was against Alabama, the perfect adversary to thwart and slay, on the way to immortality.

Instead, Georgia carried on with the eternal Georgia tradition of choking on the biggest stage, and in spite of the home field advantage and in spite of the of the early lead, they somehow find ways to lose.  Sure, we can blame the poor officiating for the handfuls of missed face mask calls and late roughing the passer calls that didn’t get called; undoubtedly, the free first downs and free yardage any one of them would have granted.  But blaming the officiating is what losers do.  It doesn’t change the fact that Georgia channeled their inner Atlanta Falcons and inexplicably just started making terrible play calls all through the fourth quarter.

Too much Nick Chubb, not enough Sony Michel.  Too many Mecole Hardman wildcat trick plays, not enough faith in Jake Fromm’s arm in the pocket.  Alabama’s defense stepped up, and Georgia simply cowered and yielded.  For every wrong choice Georgia made, Alabama made a right one, and there were numerous plays that occurred that were some of those plays where any viewer just knew the tide was turning and that Georgia was toast.

Like when Georgia had Tua Tagovailoa stopped on third and long, but couldn’t land the tackle, and then he spun away from the coverage and ran for a first down.  That led to an Alabama touchdown.  Or like when Georgia had Alabama stopped at midfield, but Georgia’s Malkom Parrish got tagged for pass interference, giving Alabama a free first down.  That also led to an Alabama touchdown.  Shit like those incidents that sank pits of despair into the guts of those rooting for Georgia, and they simply never did anything to answer them as they happened.

However, it’s the finish that was the worst, because it really fucked with the narrative in the worst possible way: it gave Georgia hope, before it inexplicably ripped out their hearts with a lightning-quick strike that just about everyone had to stop for two seconds before they realized that the game was suddenly over.

Frankly, the way Georgia was playing, overtime was their only chance at redemption, since it would put them 25-yards away, and they hadn’t seen the Alabama side of the field for the better part of the entire second half.  And when they scored the field goal first, it felt good to get that pressure of needing to score off.  And when they sacked Tagovailoa for a loss of like 11, Georgia fans had to be ecstatic at the notion of pushing them back so hard and well beyond their maligned kicker’s range, and that the game was now very much winnable.  But then on the very next play, the true freshman launches a bomb to a DeVonta Smith in stride, and just like that, the game is over.

From the relief of not losing to a field goal in regulation, the relief of scoring first in overtime, the jubilation of being on the cusp of victory when Alabama was sacked back out of range, to the heart-wrenching twisting of the dagger at Tagovailoa’s perfect strike.

For a Georgia team, it couldn’t be any more apropoic than that.  Not even the “At least Clemson didn’t win” mantra brought much solace to this defeat.

When I went to bed exhausted and disappointed, I did what I always do whenever a Georgia team Georgias (yeah, they’re now a verb); I wondered if a Georgia team would ever win any sort of championship.  And like always, the answer always is NO, but it doesn’t stop me from boarding the roller coaster whenever one gets to the cusp, nor does it protect me from the disappointment whenever they fulfil their destiny and Georgia, and the cycle repeats itself all over again.

Seriously though, I really do wonder if I’ll ever get to see a Georgia team win any sort of championship in my lifetime.  Much as I wonder if I’d ever get to see Virginia Tech win in football or the Redskins to get back to any sort of reputable glory.  The Braves have let me down countless times, and the Falcons have literally set the bar on how bad a team can possibly choke in the Super Bowl.  Atlanta United has already demonstrated their ability to Georgia already.  Georgia Tech can’t seem to become serious contenders in anything, not that I’d root for them in the first place unless they’re the only ones standing and I’m desperate.

Shit, I’d even settle for a D-II Georgia State or Georgia Southern or Triple-A Minor League Gwinnett Braves championship at this point.

And UGA is always competitive in the SEC, but it’s not possible to Georgia as hard as they Georgia’d in the National Championship.  Not to mention the ride is likely over now, since they’re going to lose both of their stalwart running backs and the monster run game that got them there, which makes the loss a little more stinging, since it was really their best and only shot for them to win, before Alabama, Clemson and Ohio State simply reload and get ready for next year.

In other words, a team from Georgia will never win a championship, presumably for as long as I live.  This won’t stop me from getting hopeful whenever one gets close or letting me get disappointed when they fail, but when it really comes to it, I just need to keep my expectations tempered and accept the fact that no matter how many times they may contend and show up to the dances, the only inevitable outcome is defeat.