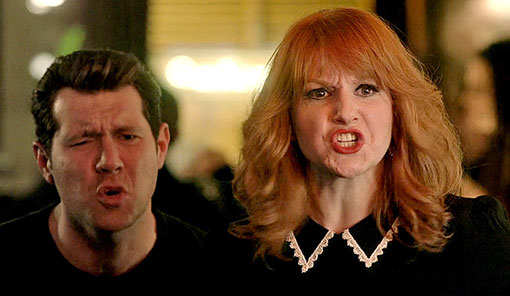 Recently I started watching Difficult People; it came recommended to me when I said that I was a big fan of Parks and Recreation.  The parallels to Parks and Rec were that it’s also single-camera shot, Amy Poehler is an executive producer, and one of the co-stars of the show is Billy Eichner, who played Tom Haverford’s flamboyantly intense sommelier in Parks and Rec.

However, those things aside, I think the comparisons kind of cease, and so far I have to admit that I’m not quite getting into the show as I hoped I would.  Sure, the show shouldn’t be more of the same Parks and Rec formula by any stretch of the imagination, and I’ll admit the last episode I saw (Italian Piñata) was actually really funny, but what it boils down to is the fact that it’s nowhere near as good as Parks and Rec.

The thing is, the show is based on two assholes who go around acting like vapid dicks, living in a sandbox.  Difficult People doesn’t actually go anywhere, and I just recently realized that I’ve been watching the show kind of out of chronological order, but haven’t really noticed, because every episode is self-contained, and it’s just a different story of how Julie and Billy can be shitty people.  This is a far cry from the Parks and Rec formula that had a continuously forward-moving storyline with characters that grew, developed and actually cared about one another.

However, this isn’t a post about how weak Difficult People is, or how much superior Parks and Rec is over every other show (The Good Place, however, is an excellent show, coincidentally created by Michael Schur, one of the founding fathers of Parks and Rec).  What really inspired this post is the fact that I realized that there’s basically a Julie and Billy in my life right now, and that I’m sure lots of people out there have their own variants of Difficult People in their own, whether they realize it or not.

It just so happens to be coincidental that I’ve been watching this show when I came to this realization, and that the people I have in mind are, like Julie and Billy, a loud-mouthed woman and a loud-mouthed gay guy.  And unfortunately, I work with them, so I see them nearly every single working day.

It’s not often I talk about work these days, much less specific people at my job, but hey, my brog’s been down for nearly two full years at this point, and there’s little chance that anyone other than me is going to get to actually read what I write any time soon, and this is something I feel like I have a little bit of fire to write about, so what the hell.

Anyway, what really made me come to this realization was that recently, I was a little sick.  But not in the very obvious hacking-coughing-germ spewing nature that is most synonymous with typical cold and flu symptoms, but more of a blind-siding illness that really started with some sinus pressure and pain while swallowing.  I may also have sneezed like three times.

I came to work on a Tuesday and was pretty much fine.  I knew I wasn’t 100%, but was still physically well and mobile.  I didn’t think anything of it on Wednesday when I rolled into work, but after about an hour in, these waves of nausea started crashing into me, and I entered a state in which I really didn’t want to move around a lot, as it would aggravate the nausea that I felt.  After about three hours, I phoned it in and declared the rest of the day as sick time, went home and slept off the nausea, and then slept some more.  I came back to work on Thursday feeling much better, and didn’t think much of it.

Apparently, two of my co-workers called in sick on Thursday.  Another made a joking remark about how I had gotten them sick, as if I had personally coughed in their faces or breathed all over them.  I don’t get sick often as it is, so it’s kind of slow for me to realize that my sicknesses might actually affect others, but the fact is that I was physically capable and didn’t really feel that bad, and since I’m an hourly wage slave, I don’t have much of a choice – I show up to work, or don’t get paid (or forfeit PTO that I frankly would rather use on myself when I actually need to).

Anyway, Friday morning arrives, and I’m in the office, early as fuck as usual, because I like to get to the office early and get nice leisurely starts to my day, before business ramps up throughout the course of it as is the norm.  The way my floor is laid out, instead of traditional office space cubicles, we’ve got what are basically cubicles, but the walls are only about 4.5’ feet tall.  So if anything, they’re like the worst of two worlds in the fact that we’re all still confined to cubicles, but we don’t actually have the convenience of cubicle walls that provide a small modicum of privacy, walls to decorate and a barrier for unwanted sights and in my specific case, sounds.

I hear one of the co-workers who was absent on Thursday gabbing away with another office gossip about how they believed they got sick because of me.  At first, I felt bad if that were the actual case, because I would feel bad if people got sick on my account and had to burn their own precious PTO because of me.  But then they kept running their mouth, and then my empathy soured and vanished the more and more they ranted about how I “showed up for like an hour to spread my sickness and then go home,” presumably laughing all the way to the bank at how I had masterfully fleeced and trolled the floor by spreading my Zika virus all over the place like a Michael Crichton-written monkey before making a grandiose escape.

So basically, they’re blaming me for them getting sick, which I would feel bad for, if they had just left it at that, and not kept talking about me like I was some malicious asshole who did it on purpose.  But that’s when I realized that this co-worker of mine was basically Julie from Difficult People, because like her television counterpart, she’s kind of a vapid self-absorbed dick, who talks too much for her own good.

Now I’ve long accepted the fact that vapid self-absorbed people far outnumber me, and that I can’t assume people are as perceptive as I can be.  But the Julie and I have been arriving at the office at the same time for the better part of two years now, and we park on the same floor in the garage, and have several times ran into each other at the entrance bridge, and have had to wait on one another at the clock punch several times.  In spite of this, the Julie seems to conveniently forget that 99% of the time, I’m at the office when she is, and goes off to rant about how I got her and Billy sick (despite the fact that at this time, like 35% of the entire campus is riddled with sick people, and the symptoms being described weren’t the same as mine).

I have a debate in my head on whether or not I should address this, because I don’t want to give the impression that I was eavesdropping on their conversation, but the truth is that it wasn’t by choice, because of our lack of walls and privacy, and at the same time I want Julie to know that I could hear her saying unpleasant things about me, because this kind of behavior shouldn’t be acceptable in a workplace environment, and I don’t feel like letting it slide and becoming habitual to Julie it up without having to worry about some modicum of consequence.

So I send Julie a short and concise email apologizing if she feels that I got her sick, but quoted her own choice words in a manner that let her know that I could hear her accusing me, with hopes that maybe she’ll be a little embarrassed or guilty for getting caught, but probably not because she’s basically Julie, who’s an unrepentant narcissist who doesn’t think she’s in the wrong ever.

But we can’t have a Difficult People analogy without a Billy to a Julie, which brings us to her gay BFF that sits right next to her, who was also sick on Thursday, and also presumably blamed me for it, because if Julie did, he did too.

However, as far as the sickness goes, the Billy was rather quiet about it; undoubtedly, upon his arrival to work on Friday, the Julie probably blabbed about me during their private coffee walk, since it was evident that even hushed conversations are not always private in this environment. But he’s no less a Billy-like dick in my head for a different reason, which when combined with the Julie’s revelation of being a dick, makes them real life Difficult People.

TL;DR – the Billy went off on a not-so quiet diatribe when notified that he had to attend an InDeisgn course; presented by me.  Talking about how he’d only been a graphic designer for (number of years that’s barely half of my experience), and how he knows how to use InDesign and how he shouldn’t have to do “this bullshit.”  All within earshot of me, whom again, doesn’t choose to hear this shit, but can’t help but hear it, because of no audio privacy.

Suffice to say, my opinion of the Billy wasn’t very favorable after that particular incident, because who wants to host anything knowing that someone in attendance is very much there under protest, and lacks the maturity or social grace to hide it in their vocal or body language?

Anyway, the timing of when I started watching Difficult People has been very convenient to having the perfect analogy for identifying two assholes in my little world.  The fact that it’s literally down to the gender identification is pretty astounding in its own right, despite the fact that Difficult People don’t necessarily have to be the woman and gay male BFF trope, but more a pair of self-absorbed dicks content to live in their own little galaxy and treat those outside of it poorly.

Difficult People exist all around us.  It’s just a matter of noticing their patterns and habits, and then you’ll never not see them all around.