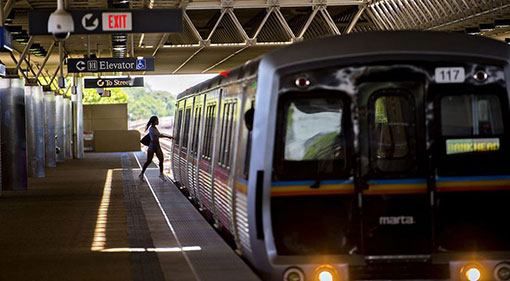 That’s the Atlanta way.  Or rather, announce news that declares some grand unification of transportation agencies in order to mask that some other umbrella-shell company is being created that will pay off a whole lot of new people for doing jack shit.

Fresh on the heels of my last post where Google put a spotlight on the unintentionally-official meaning of MARTA comes this news that Georgia is going to create a regional transit governing system that will oversee the mass transit authorities across the entire Metro Atlanta area; including MARTA.  The solution?  A new name!

The Atlantaregion Transit Linkauthority, or The ATL!  And they invented new words in the process because they don’t know how acronyms work!

In other words, the goal on paper is that supposedly by 2023, all buses, from Cobb’s CobbLink, Gwinnett’s GRTA, MARTA, and any other regional buses in Clayton or DeKalb will all be re-branded ATL buses.  All MARTA trains will be re-branded ATL trains.  The ATL transportation options will hopefully be consolidated under one brand and identity, with the theory that it will supposedly actually help boost economic viability.

What’s actually going to happen is that by 2019, the teats of all these regional transit authority will be milked by a few people who came up with this brilliant idea, they’ll make a lot of money, by 2021, The ARTLA will be all but forgotten 2022, Cobb and Gwinnett will still be afraid of black people and oppose the rebranding of their buses and in 2023, MARTA will still be MARTA, GRTA will still be GRTA, Cobb will still be vehemently opposed to black people, and Google will still spit out Moving Africans Rapidly Through Atlanta in their queries for the meaning of MARTA.

Seriously, I think this is a terrible idea.  Georgia politics love to make announcements and increasingly create higher and taller shell companies and agencies to fold their other failed experiments into, but in the process, bilking more and more money into the pockets of fewer and fewer individuals.  Rarely do any actions actually occur, and only after the bars have been set so jadedly low that when they actually do happen, they’re trumpeted as these monumental successes, and it resets all the expectations to these really low-hanging fruits.

I’m positive The ARTLA will get a new logo in coming months, because the city really loves to blow money on logos and brands that they never actually use, but at least someone is making some money somewhere, but that’s often times the goal anyway.

It’s really not that difficult what the people of Atlanta really want – more action, fewer announcements.  Instead of talking about all these plans that will consolidate the highly inefficient transit options of the city, just fucking doing things about it.  Even if it The ARTLA plan goes through, what’s going to prevent it from being as segregated as it is now?  People will avoid the routes that veer embarrassingly around Cobb and don’t reach Gwinnett, and the trains will still only go to the airport, but stop just outside the city lines of John’s Creek.

If shit like this isn’t ever resolved by 2023, all the acronyms, logos and name changes in the world won’t change a single fucking thing, but at least some corrupt assholes will be getting paid each time.