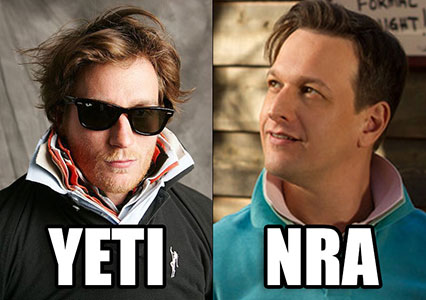 Have your slave butler get the popcorn: the NRA is outraged with the YETI cooler company for deciding to cease their partnership as an NRA vendor, demands that their mindless, gun-crazy followers and underlings boycott

Is there anything more entertaining than two icons of things white people like feuding with each other?  In one corner, we have the YETI cooler company, the fairly young company that manufactures supposedly high-end coolers and drink receptacles that white people go gonzo over.  And in the other corner, we have the ageless and timeless National Rifle Association, the biggest punching bag save for the president himself for the left, rife with criticism for the fact that there’s a shooting almost every single day, primarily by white people, but that doesn’t change the fact that the alleged majority of NRA due-paying members are white.

Honestly, this does make YETI look a little more favorable in my eyes.  No, this isn’t going to make me drop what I’m doing and go drop $200 on a fucking cooler, when a $5 Styrofoam gas station box and 50¢ worth of ice accomplish the exact same thing, but it will take YETI out of my crosshairs as something to criticize because I for the life of me can’t comprehend why white people go so bonkers over a company that makes overpriced coolers and has the branding of all caps Arial Black on a black rectangle that makes me wonder what the fuck I’m doing with my career; yeah, it’ll prevent me from elaborating on that thought, with 700 more words.

But it doesn’t change the fact that seeing a good old fashioned white-on-white conflict makes me giddy with ironic anticipation at seeing two sissies getting into a slap fight.

Seriously, YETI vs. the NRA is the best white-on-white feud I’ve seen since Duke got paired up against Yale in the 2016 Men’s NCAA basketball tournament.

The difference is that there’s probably a tremendous amount more overlap between the two allegiances here rather than the basketball game, because I’d imagine it’s extraordinarily more difficult (not to mention financially taxing) to have attended both Duke and Yale, than it is for an NRA member to own a YETI cooler.  That being said, I fully anticipate there being some idiotic YouTube videos on the near horizon of a bunch of NRA dumbasses showing their allegiance to their gun club, by opening fire on YETI coolers.  Their at minimum, $200 YETI coolers, that they’re willing to destroy and make unusable over what’s really a difference in opinion.  Like when people were destroying their $100+ Keurigs because they pulled advertising from FOX News.  That’ll show ‘em!

Man, I really, really hope there’s an instance where an angry NRA supporter shoots his/her YETI, but because they’re so heavy duty, it deflects and manages to hit them instead, and it’s all caught on tape, and ends up on YouTube.  That would be like a mega win for YETI, because not only does it twist the knife that they’ve already jammed into the NRA, but it would be the absolute ultimate form of advertisement for the durability of their coolers, that it can withstand not just conventional gunfire, but the baseless ire and hostility of an NRA member.

I’d pay to see that happen, and that, would actually make me consider plunking down some big money for a YETI cooler.

But until then, I’m just going to sit back and enjoy the ironic humor of watching the NRA feud with YETI.  Now someone go and get me a bottle of Fiji water.