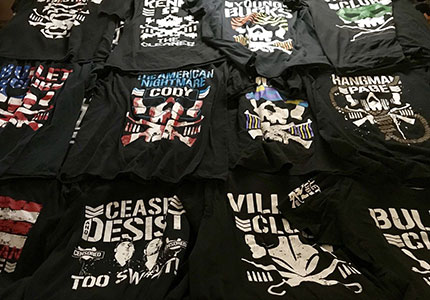 Over the weekend, I went to a Ring of Honor house show with my brother while I visiting Dallas.  Despite my general revulsion of the idea of going to another WWE event in my life, I was looking forward to this one, because I’d been to a ROH show back in like 2013, and enjoyed it a great deal.

Back then, Kevin Steen was the world champion, and I was exposed to wrestlers whose names I’d heard before but never actually seen, like Roderick Strong and Jimmy Jacobs.  I saw some guys I’d never knew existed, like the Briscoes.  And there were a few familiar faces still proving they could still work, like Steve Corino and Rhyno.  Shelton Benjamin was on the card and got a massive beatdown after the match; apparently he was on his way back to the WWE, and as is often the tradition in the biz, a wrestler must go out on their backs as to repay the promotion for keeping them employed.

Plus, the crowd was smaller, and not a clusterfuck of humanity like a big-box WWE event can get, so I found it wholly to be a way better experience as a wrestling fan.

But that was over five years ago, and a lot has changed since then.  Most of the names and faces I saw back then have moved onto to the WWE or gone to New Japan.  After TNA collapsed, a lot of their wrestlers entered ROH, among other promotions.  And this little stable known as Bullet Club that was just being formed in 2013, is now probably the biggest brand in the industry today, and yes that is taking the WWE into consideration as well.

Overall, the ROH show in Dallas was pretty decent, in spite of the particularly weak ending, which saw a title change of the ROH Television championship going to a big oaf wrestler known as Punishment Martinez.  The fans in the crowd hated the shit out of him because he had a slight resemblance to Roman Reigns, and derided him with taunts of being Roman Reigns, therefore we hate you.  It’s a title awarded to a guy that doesn’t quite embody the reputation of ROH, which is fast, exciting technical wrestlers, but who really knows what direction they’re trying to go?

It doesn’t really matter.  I’m not that hardcore of a fan anymore to add ROH to my weekly list of promotions to keep my ear to the ground for to care that much.

The biggest takeaway from the event for me however, was something that I predicted would be the case, but the sheer magnitude of just how right I was still made it somewhat of a surprising occurrence.

While packing for Texas, I debated with myself on whether or not I should wear my one ROH t-shirt to the event.  Honor Lives – a pretty simply slogan that signified older times of the promotion.  But then I had a thought that wearing an ROH shirt to an ROH show would be the equivalent of wearing the concert shirt to the concert, which is always lame, so I thought against it.  I debated on wearing a different wrestling shirt as to be counter-culture, but then realized that I was putting way too much thought into what t-shirt to wear to a wrestling show and ended that debate real fast.

Besides, with the working relationship between ROH and New Japan, I figured the only shirt that anyone would be seeing would be the ocean’s variety of different Bullet Club shirts that are available with a new one coming out every week, or so it seems.  It was a very safe bet, due to the meteoric rise and popularity of the Bullet Club brand in general, what with their shirts and logos being seen across all wrestling shows, regardless of where in the world it is.

When we rolled up to the South Side Ballroom in Dallas, the gates hadn’t been opened yet, and there was a line of wrestling fans stretched to the parking lot.  From a distance, we could only really see black shirts, and it was still easy to tell that the vast majority of them were Bullet Club shirts.  Opting to not wait in a line in the 98F degree Texas sun, we parked and hit a bar for pre-game drinks, before rolling into the venue, which by then had mercifully opened.

I can’t help but feel bad for ROH as a company here, because although they might get some slices here and there from sales, exposures and other partnerships, the lion’s share of all Bullet Club related profits isn’t going to them.  I’m not sure if it goes to New Japan Pro Wrestling, or to the members of the stable, more likely both, but the fact of the matter is that the guys in ROH are definitely getting the shorter end of the working arrangement.

But it’s partially their own faults too, because at the merch table, they’re not doing themselves any favors by selling 12 different Bullet Club shirts and like 3-4 shirts for ROH and their own wrestlers.  I get that there’s merits to be making lots of nickels and dimes, but there’s also way more to be made by making some fucking quarters too.

Needless to say, the fact that Bullet Club is so rabidly popular and saturated the audience so much, leaves me with the defiant feelings that they’re not nearly as cool as everyone thinks they are, especially in comparison to the earlier days when the stable was led by guys like AJ Styles and Prince Devitt AKA Finn Balor.  Now I like Cody Rhodes personally, but I can’t help but feel that he still has a lot to prove and some dues to pay before he can be on the level of his predecessors, and based on the odd tween-status of Kenny Omega with his sub-stable now the Golden Elite with Ibushi and the Young Bucks, combined with his recent win of the IWGP World Championship, it kind of looks like he’s already on his way towards separation from the DJ Tanner Wrestling/Jumped the Shark stable.

The bottom line is that the saturation of Bullet Club shirts actually seems worse than the nWo in 1999, when just about everyone on the planet had an nWo shirt (I did, and still have it somewhere).  Between the sheer availability of them (Hot Topic sells them for goodness sake), and social media spreading the fandom like fungus, fairweather Bullet Club fandom has had the opportunity to sprout and spread way more than the nWo fandom ever had a chance to, and they most certainly are capitalizing, and it’s way beyond insufferable already.

Back when Kenny Omega turned on AJ Styles, I thought about getting a Bullet Club shirt.  When I still did Black Friday shopping, I almost picked one up then, but they didn’t have my size, and I wasn’t going to settle for a small or an XXXL.  In hindsight, it’s almost a blessing that I didn’t get one, because I’d probably be all disgusted by them now and be put in that odd situation where I resent it, but don’t want to throw it out because I paid actual money for it.

I do however, feel the urge to parody the shirt now, and based on cursory internet searches, I’m far from the only person to have these feelings these days.  When fandoms spiral out of control, the only logical direction that I tend to go towards is contrarian and defiance, because I don’t think it’s ever cool to haphazardly like things that everyone is liking for fairweather reasons.

Plus, I found out that Jeff Jarrett is also technically a member of Bullet Club.  If that doesn’t vouch for how fucking lame they are now, then I don’t know what else to say.