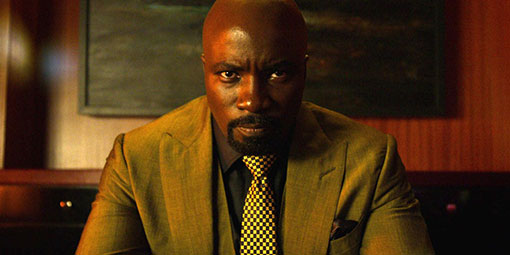 Let’s just cut to the chase: this is probably going to be pretty much nothing but spoilers, so courtesy jump right ‘chere

Okay, now wasn’t that an interesting end to a season?  I can’t really say I saw that coming although I feel like I should have, but now seeing how things turned out, I have to say it’s a refreshing twist to the usual trope of superhero shows ending in clichéd ways that often lead to people like me having a 😑 expression, and feeling pretty unsatisfied.

But Luke Cage basically turning heel??  The same Luke Cage, who was pretty much Mr. Paragon throughout the first season, as well as his part in The Defenders, instead ending up pulling the right trigger for Renegade, and setting up a whole brand new world of plot possibilities, instead of one linear path, dependent on the introduction of another bad guy?  Now that’s some outside-the-box thinking for the showrunners, and an interesting gamble that almost dares Netflix to order another season of the show in order to see how things transpire.

Basically, the takeaway from the season’s central plot is that in the end, Mariah Stokes won.  She, who often seemed unstable and unsure of her identity, with no super powers, and only a posse of untrustworthy gangsters, and ended up incarcerated, still bested the super strong, bulletproof Luke Cage, and sent him down the path of darkness, where definite redemption will need to be sought before he can really call himself a hero again.

It was actually some genius-level villainy displayed by Mariah, whom with her final moments she didn’t know were her final moments, executed the brilliant plan to attempt to sway Luke Cage to the dark side by bequeathing Harlem’s Paradise to him, knowing the club’s metaphorical powers to corrupt anyone, as it’s basically been the epicenter of shady shit for generations.  And as strong and indestructible as Luke Cage might’ve been, his intelligence was still that of an ordinary man, regardless of how much evocative literature he’s seen reading throughout the show, and by not refusing the inheritance and believing he can control the underworld by standing atop it, completely fails to realize that doing so, he’s a part of it.

Luke Cage, boss of crooks of Harlem, here we go.

I can’t say I followed his comic iteration to know if this was an idea used in comic form at any point, but as far as I’m concerned, I thought it was a pretty good direction and twist to execute.  Because instead of waiting who the bad guy is going to be next season, we already know who the bad guy is, whether or not Cage realizes it’s him.  And standing where he is, I think it’s going to mean that there will even more cross-pollination from others in the Netflix-verse, probably in the forms of Jessica Jones or Danny Rand, especially considering the latter, as well as Colleen Wing made prominent cameos in this season.

Presumably, the easy theory is that Diamondback returns, and since he’s badder than crime boss Luke Cage, it’ll be the impetus to realize that he needs to be a hero again, but it’ll still be interesting to see in the earlier episodes the conflicts between Cage and all his other cohorts as they all try to figure out what his end game is, if he himself even knows what he’s doing.

Either way, there were times when season 2 was a little slow, but overall I have to say that it was still enjoyable.  I liked the brief cameos of core characters from other shows, since they haven’t really done such in any other shows, and I hope that they do it more often in the future, because the comic nerd in me always loves crossovers.

Misty Knight was pretty easily the coolest character of the season, who definitely had the coolest moments throughout the season, and is perfectly set up to play a prominent role in the future as well as if and when they do another composite Defenders season.

I still place the Luke Cage series as a definite #2 in the Netflix-verse behind Daredevil, and still noticeably a stronger show over The Defenders, Iron Fist and Jessica Jones.  Look forward to more of it in the future, and hopefully Netflix keeps ordering them.