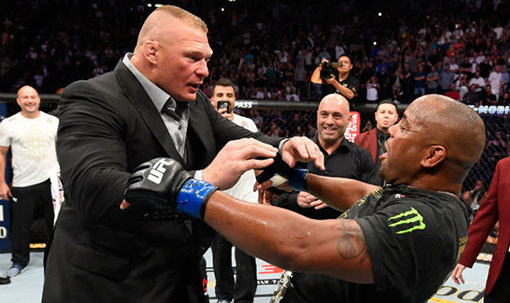 When in doubt, it’s probably a work (read: premeditated).  As the line continues to blur between the UFC and WWE, with stars jumping from one promotion to the other, there’s one thing that has always been crystal clear: the pursuit of money.  Both are businesses, with the goal of making as much money as humanly possible, and despite the fact that one is more legitimately a sport than the other, the objective remains the same.

UFC promoting a Daniel Cormier vs. Brock Lesnar fight will draw millions of viewers, as there’s a legitimate correlation between gigantic numbers and Brock Lesnar fights.  Which equates to a whole lot of money.

WWE having Brock Lesnar as its champion will create a cross-pollination of viewership, drawing interest from UFC fans who want to see Lesnar perform in the fake sport, whether it’s out of curiosity, or to see if any of his three matches he’ll have this year might give away any sort of intel to strengths or weakness for betting purposes.

And in the end, regardless of who wins in the Octagon, both parties and all involved participants stand to make a gigantic payday out of this affair.

Not that it really matters, but it’s still all probably a work, if you look into the details of the scenario.

Cormier is 39 years old and has promised his family he will be done with fighting by age 40. His birthday is in March. He has no time to waste.

For starters, there is a timeline for Daniel Cormier’s title reign.  Usually within nine months, a champion will have anywhere from 2-3 title defenses.  However, Brock Lesnar is still technically under suspension for having used an illegal substance in the past, and is not eligible to return to the Octagon until January at the earliest.

Barring broken promises, the window for a Cormier vs. Lesnar fight is only open for January, February and most of March, in 2019.  And after their stunt in Las Vegas, it’s pretty safe to assume that inside the brains of Dana White, Vince McMahon and all their companies’ investors and shareholders are seeing nothing but dollar signs in their eyes at the earning potential of this magnitude.

And here’s the thing: they have all the power in the world to make sure that this happens.  And if they really want to make a lot of money, they most certainly are.

White nonchalantly remains mum about who Cormier’s first heavyweight championship contender is for two months or so, while championships in other classes headline the next few UFC shows, and then he reveals the very obvious answer that it’s Brock Lesnar.  However, it can’t happen until January at the earliest due to his suspension, meaning Cormier has a real chill rest of 2018, as he will have zero fights to fight for the remainder of the year, although he’ll be sure to talk about all the training and preparation he’s going to be doing for Brock Lesnar.

Concurrently in the WWE, there is absolutely no way in hell that Brock Lesnar drops the WWE Universal Championship prior to his showdown with Cormier, because the interest and buy rates of the showdown are entirely dependent on Lesnar looking as monstrous and unbeatable as possible.  This is actually a tragic development for the WWE and their creative team, who has to be feeling the ever-growing heat of fan resentment at having a champion that barely ever shows up.  Considering this has been Lesnar’s modus operandi over the last two years, I wouldn’t have guessed it would have survived a third, and all the seeds appeared to have already been planted for an eventual dethroning, at the hands of Braun Strowman.

Granted, this could very well still happen, but definitely not until Cormier and Lesnar have their showdown, which means not until March.  But as far as the WWE and their fans are concerned, this isn’t the best news in the world, because this all but guarantees the continuation of the hold pattern they’re doing with one of their world championships, because Lesnar won’t be allowed to lose that belt until this happens.  Guys like Roman Reigns, Braun Strowman, Kevin Owens and all the other stalwarts on the roster will basically have nothing to fight over or achieve, leading to a bleak year of WWE coming.

What this really amounts to for Brock Lesnar is he too will have a pretty cush rest of 2018, more so than Cormier, since the WWE is a scripted program, whose performers are all independent contractors who primarily make their ends meet on loose contracts, gate bonuses and merchandise sales, and nothing increases your financial leverage than being a champion.  Lesnar having a lock on the belt keeps his spotlight bright, which usually equates to all the financial benefits, but it’s also denying a whole lot of guys on the roster who do way more work than he does, and doesn’t get a whiff of the dollars he pulls in.

Frankly, the first thought that popped into my head when I saw this transpire was that it was not only a work, but a work propagated by Brock Lesnar and Daniel Cormier themselves.  They’re allegedly buddies, as most professional fighters sometimes are, when they’re not trying to knock each other heads off, so it’s not a stretch to imagine a scenario where if Cormier won the heavyweight championship, to immediately stage this altercation, in order to plant the seed in the eyes of people in front of live cameras, because that’s how predictable the world is.

Brock Lesnar benefits from this, because regardless of if WWE Creative were going to have him drop the Universal Championship or not this year, it’s most definitely not now, with this stunt.  Lesnar retains all financial benefits of continuing to be champion, and has an even cushier schedule, with perhaps two more matches at SummerSlam and Survivor Series, and then going into hiding to train for his showdown with Cormier.

Cormier gets an extremely relaxed schedule for the rest of the year, and basically has one mega-fight with Brock Lesnar, and then calls it a career.

At first blush, I’d imagine Lesnar takes a dive against Cormier, since I feel like he had more to gain by putting this plan in motion, by it all but guaranteeing his WWE Universal Championship reign into 2019, and if they really are buddies, then Cormier retiring as champion seems like the most logical finale, since he won’t have to fight past age 40, UFC won’t have to worry about figuring out how to get their championship off of Brock Lesnar, and who doesn’t love a vacant championship where a tournament has to happen?

And then Lesnar can drop the Universal Championship at Wrestlemania, which was always lurking around the corner in March/April the whole time, where he’ll probably call it quits too, because he’ll be 41, and if this plan really does come to fruition, he’ll have cashed in tons on borrowed time, and doing the job to like Braun Strowman seems like the very appropriate thing to do to pay the company back for theoretically hijacking 2018.

But yeah, totally a work.  Put together by Cormier and Lesnar, so they could cruise through the rest of 2018, and then cash in on a monster payday next year before they both respectively call it quits.  Seems legit