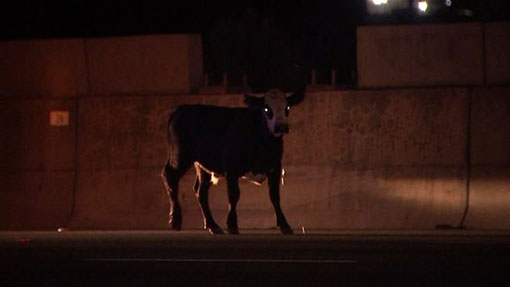 Y’know, I imagine anyone that knows me and my fascination with trucks that spill food all over Georgia highways might have thought I’d have been beside myself with excitement over the news of this wild story of a truck crashing on I-285, releasing nearly a hundred cows onto the busiest highway intersection in the city.  And for like two seconds, the thought is knee-jerk amusing, but then I come to the realization that unlike all of the other times where some dumbass truck driver overturns and spills their cargo all over the road, these are actually live animals, not processed consumables, and suddenly it’s not really that funny to me anymore.

Sure, every social media comic has a one-liner or a pun or fifty to share with the internet, hoping to get anybody to notice them, but the longer this story unfolded, and the facts began to emerge about how several cows died on impact of the crash, but then many more were running around wild, likely scared out of their minds at the chaos, it just kind of made me sad.

Now I’m not going to deny the fact that I love to eat meat, and just the other day, I pigged out on a litany of beef cuts at a Korean bbq, but I still have empathy for living things, even if their eventual destiny is to become the same beef that’s on the menu at the restaurants I go to.  Frankly, I feel a little better knowing that the cows that become the beef that I enjoy don’t have to live lives where they’re traumatized and put through a wild goose chase before they’re re-captured and sent to die anyway.  I’m not saying I want all the animals that become the meat I eat to be lavished in grapes and living in luxury, but I’d rather not them go through lives of torture either.

When I looked through some of the photos of the cows running around the Metro Atlanta area, there was one photo where the cops in the background were laughing; I get that it’s a unique situation and given the right mood and frame of mind, I might’ve thought it was funny too, but today it kind of irked me, because the cow that they had managed to wrangle was a fortunate survivor of the wreck, but really it’s just being accounted for because their meat and/or their milk has some money to make for someone else.

But I think what really brought me down the most was the thought of the one cow that survived the crash, but then was killed when it was struck by a driver.  Ultimately, Atlanta has some of the most lethally aggressive drivers of anywhere I’ve ever been, and as much as I take enjoyment of all the truck crashes that spill processed consumables, just about everything can be avoided if the people who drive on Atlanta roads would just slow the fuck down.

The cow truck crashed because the driver was probably driving like a dumbass, and the cow that got hit and killed was probably by a driver going too fast for the situation.  But really, I feel bad for the cow, because it survived a traumatic scenario, and during its likely frightened scramble to try and just find some safety, it gets killed anyway because a typical idiot Atlanta driver plowed into it.

What’s even sadder is that this is literally the third time this year, where a truck has released cows onto the roads.  It’s by no means suggesting to me that I ditch eating beef, but it does depress me a little bit to know that my future beef already has a pretty dismal destiny and existence, but it doesn’t really need to be made any worse by going through some false hope goose chases either.