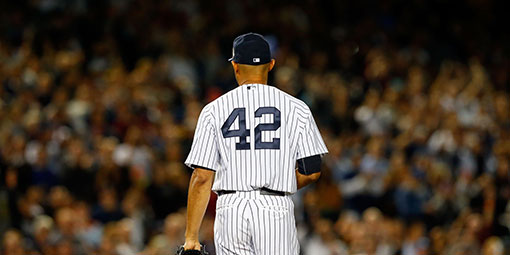 In short: Mariano Rivera headlines the 2019 Hall of Fame class, being the first player ever inducted unanimously

Let me first start off by saying that I am ecstatic for Mariano Rivera, in being the first player ever inducted unanimously with 100% of submitted ballots all voting for him.  There is zero debate in history that he is the most clutch pitcher of all time, having something of like a ridiculous 0.70 ERA throughout over nearly 100 postseason games, becoming more and more unhittable as the Yankees advanced in the playoffs every time.

I still remember in 2009, which was the last time that the Yankees won the World Series; against the ridiculously explosive offense of the Phillies, the Yankees time and time again throughout the six-game series went to the bullpen and brought Rivera out for the save.  And in each of the Yankee wins en route to the championship, it was Rivera who slammed the door, allowing no runs and just three hits over 5.1 innings of clutch relief.

It should be worth noting that this was when Rivera was 39-years old, and people had long already been proclaiming that age was catching up to him, and that he was going to be limping to the finish line.  Instead, he ate the Phillies’ lunch and carried the Yankees back to the top of the mountain, which was again, the last time that the Yankees have been World Series champions.

And it wasn’t even the saves and the innings that Rivera really brought, whenever he took the mound, it was more the fact that he inspired calm and confidence, among fans and his teammates.  And among the opposition, the legend of Rivera’s cut fastball literally rendered generations of hitters with a feeling of defeat and dread of getting to be one of the guys giving up critical outs at the end of a baseball game.  The saying of “he can tell you it’s coming, and there’s nothing you can do about it” rings entirely true with Rivera, because he basically threw nothing but the cutter his whole career, but the numbers speak for themselves; nobody could do anything about it.

I’m not even a Yankees fan, but even I had this feeling of calm and no real fear that the Phillies were going to make a comeback.  And even when the Yankees asked of him to pitch more than an inning at a time, he just continuously delivered, methodically putting Phillies hitters away again and again, until there were no more outs to get.

But aside from his immense talent in baseball, Mariano Rivera was basically a saint.  In a world where professional athletes ultimately get everything while the rest of the world doesn’t, Rivera remained as grounded and humble his whole career, as the poor kid from Panama he grew up as.  Where even his own teammates made tabloid news from the models they dated or the golden thong they circulated among each other for good luck, in a league where player egos inflated to ridiculous proportions, Rivera was ever the dutiful family man, always putting God and his family first, and always minded his own business in peace.

As much of a monster he was on the pitching mound, he was basically the modern-day equivalent of a saint off of it.  As far as citizenship and humanitarianism are concerned, on top of a legendary playing career, it’s a no-brainer that Mariano Rivera is a worthy pick to be the first-ever unanimous selection into the baseball hall of fame.

Edgar Martinez and Mike Mussina, I agree with their inductions as well, because despite the fact that neither won any championships, both had tremendous and productive careers, that should absolutely be recognized and honored forever.  I can’t say the same about Roy Halladay, because as much of a legendary talent he was in his career, I have objections with a guy that basically killed himself, loading himself up with fatal amounts of morphine and amphetamines before flying an airplane, but sentiment and ignorance of the facts tends to lead to choices like this.

However, as much as I hate to be a wet blanket, I do have to say that Rivera’s unanimous choice really should come with an asterisk: he may have been on 100% of the submitted ballots, but 100% of the available ballots were not submitted.  Most notably is this one tryhard who inexplicably has a BBWAA ballot for the Hall of Fame, who states that he did not vote for Mariano Rivera, but also chose to not submit his ballot.

The point is, had he submitted his ballot, then Rivera wouldn’t have gotten 100%, plain and simple.  And ultimately, this is kind of inherently the flaw of the entire Hall of Fame process, and as good as it is that things are finally changing and we’re getting to have unanimous selections, it kind of creates a whole lot of hullaballoo about votes in the past now.

I’m going to go out on a limb and theorize that social media and the internet has a large part of shaping the HOF now.  We live in a time where it’s becoming easier and easier to get information, about BBWAA ballots being submitted, because a lot of writers themselves are buying into the want for some transparency, and it’s becoming harder for those curmudgeons who vote, or don’t vote, out of spite, to hide in anonymity.  But because of these changes to the world, things like the HOF vote are becoming right, but it doesn’t change the fact that many guys in the past were obviously wronged.

I like Mariano Rivera a lot.  But with no disrespect to him, he shouldn’t have been the first unanimous choice, and it’s not even close.  Names like Cal Ripken, Jr., Hank Aaron, Babe Ruth, Tony Gwynn, and Nolan Ryan come to mind; these are respectively some of the greatest players to ever play the game we’re talking about here, and all of them were victims of their time, where spiteful BBWAA writers could utilize their agendas to deny honor to any one of these legends of the game.  Ken Griffey Jr., Chipper Jones, Greg Maddux, and Randy Johnson are more recent names to have also felt the wrath of snobs who were unable to look past their own egos to check the right boxes.

I feel like the internet has helped keep writers honest and accountable, or at least be prepared to defend their choices, but the reality is that there’s really no logical defense for voting for the greatest players in the history of the game.  At least one of the guys who didn’t vote for Cal Ripken Jr., straight up admitted that he felt that no one player should be more important than the HOF itself, but it’s hard stretch to believe that anyone else will admit to it again in the future.

It’s the defending of the past that gives me mixed feelings about Mariano Rivera’s unanimous selection, and I have zero ill will or belief that he didn’t deserve it.  He absolutely did.  He was and frankly always will be, the greatest closer of all time, and I’m glad that he was recognized as such with the ultimate honor.

This all but locks Derek Jeter as a unanimous selection for next year, when he becomes eligible for the first time.  But that’s really about it; the game has changed so much, and free agency has mutated the game into an environment where players really won’t stick to a single team for their entire careers where they’ll win championships and put up numbers, and do all the things their predecessors did before them to become such unanimous choices.

Albert Pujols will get in, but he’ll always have that weird scent on him, having switched to the Angels from the Cardinals where he’s still kind of limping through the remainder of his deal.  Not to mention the question if he’ll be as unanimous of a choice he seemed like when he was winning his second championship with the Cardinals.

The days of guys like Jeter, Rivera, Chipper, Cal, Gwynn and Biggio are long gone, and it’s going to be harder and harder to find unanimous guys in the future.  But change is good, sometimes.  And we should all be happy that a saint like Mariano Rivera gets to be the first guy to hoist the title of unanimous selection.  Because this time next year, people all over the internet will be digging up all of Derek Jeter’s personal life dirt, and trying to use it as justification to try and convince at least one BBWAA writer to not check his name on their ballot, despite the fact that undoubtedly will.