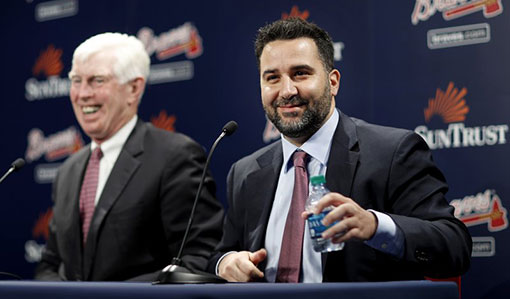 Go on, get ‘em Craig: NBC Sports’ Hardball Talk writer Craig Calcaterra lights into the Atlanta Braves front office after their apparent ambivalence for the success of their baseball team

I don’t follow a tremendous amount of sports as much I once used to, but there are a couple of names that I’ve grown to really enjoy and respect throughout the years.  Joe Posnanski and Tom Verducci come to mind pretty quickly, but after reading this scathing editorial by Craig Calcaterra, I have to say that I think he’s ascended to that level of “this guy often piques my interest, no matter what he’s talking about.”

I’m not going to bother narrating the things that he wrote, because his piece in itself is pretty brilliant, mirrors a lot of the same thoughts that I have about the Atlanta Braves, Major League Baseball and professional sports itself, but I just really want to extol just how much I loved the fire coming from Calcaterra.

He’s totally right; the Braves are operating as if they think that their fans are idiots.  Unfortunately the arrogant front office, most notably represented by president Terry McGuirk and GM Alex Anthopolous, aren’t entirely wrong either; lots of the Braves’ fans are idiots.  Lots of baseball, and professional sports fans are idiots.  Most fans of anything in general are often idiots.  Not that there’s anything wrong with some blind faith in the things that people like, but when it comes to analytical thinking, that’s just stuff that some people don’t want to do, and it unfortunately puts them into the category of being idiots, as far as front offices are concerned.

But back to Calcaterra’s editorial about the Braves’ brass, he’s not wrong either.  The Braves, in spite of their 2018 success, have shown little interest in trying to achieve more.  In fact, if anything at all, it seems more like an inconvenience that the Braves got good so quickly, because it kind of forces the front office’s hand to react to the success, and go against their timeline and try to pretend like they’re acting in accordance to expectations.

Long story short, the Braves should for all intents and purposes, be similar to how they were the year prior.  They have most of the same components that led them to perform way better than expectations, and get into the playoffs, but they also have made zero strides in trying to improve upon the weaknesses that led them to stutter and falter in the playoffs and advance no further.

Even Ray Charles can see that the Braves desperately need another starting pitcher.  And there were quite a number of fairly competent pitchers that were available on the market that they basically made no effort to acquire.  Somewhere along the line, the team thinks Luis Gohara, a chubby kid who missed more of the season than played in it, is the answer to the woes of the team, when guys like Dallas Keuchel could be gotten.  And there’s little chance that Nick Markakis has the year he did in 2018 in 2019, but he signed a reasonable deal that isn’t going to hurt them tremendously either.

The point of all this is that Calcaterra’s piece pretty much says everything that I’ve ever felt about the Braves, and I’d highly recommend it to anyone who has a modicum of interest in baseball or the Braves.  The team has no concern of winning, and is more focused on the day-to-day operations and trying to make as much money as possible with using the least amount of it.

I get that baseball in itself is a business and that’s ultimately the goal of any business, but I really wish that teams like the Braves would stop crying poor and acting like they’re not in an industry that’s making literal billions of dollars in revenue with each passing season, with no evidence of it slowing down; unless their idiot fans decided to stop being idiots, and then inexplicably and collectively stopped buying tickets, going to games, stopped watching baseball and purchasing merchandise.  But because shit like that will never actually happen, the status quo isn’t ever really going to change, and as entertaining as scathing pieces like Calcaterra’s was, nothing will ever change.