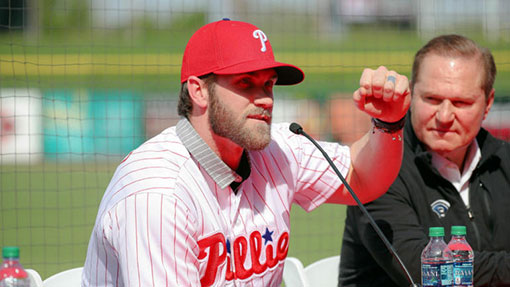 With the news of Bryce Harper signing the most historic mega-deal in baseball history comes a whole lot of interesting things:

Amidst all of these things, are and will be many more, articles that will be examining the finer details and the minutiae of Bryce Harper’s deal with the Phillies.  And in a previous time in my life, I probably would be one of them, and be ready to declare it “a bad deal” because of the hypothetical likelihood that by the time Harper is 38 years old and hobbling into the final year of his deal in 2032, he most certainly won’t be playing like a guy that will be getting paid like $28 million dollars, and how long-term free agent deals pretty much always fail, because players rarely contribute the statistics necessary to justify their salaries.

Such could very well become the case by the time 2032 rolls around but the bigger question really boils down to “but did the Phillies win a championship(s) in those 13 years?”

If the answer is “no,” then we can probably say perhaps the Bryce Harper contract was not a good signing; obviously this depends on his statistics, because if he produced well throughout the cumulative life of the contract but the Phillies failed to win a championship because baseball is still inherently a team sport, is a different story, but Harper didn’t produce well, or missed significant chunks of time due to injury or any other reason to justify poor performance, then even more reason to why it simply wasn’t a good deal.

However, if the Phillies do manage to win a championship within the next 13 years, then I would have to say that the Bryce Harper deal was a successful one.

I think it really is that simple when it comes to judging player contracts, in any sport.  Yet the newer generations of overly analytical fans are way too quick to judge and predict failure, when they’re probably not seeing the bigger picture in why blockbuster contracts happen in the first place – to help try and win championships.

The way I look at it, the Phillies have effectively bought themselves 13 chances to win a World Series; with there being degrees of multiplication on any given year, based on how many other notable large salaries they have on the payroll, like Jake Arrieta over the next two years, and whoever else they manage to sign in years afterward.  If the Phillies fail to win in the next two years, then perhaps the Jake Arrieta contract wasn’t that great, but if they fail to win a championship over the next 13, then the Harper deal will probably be declared a bust.

And this really applies to any team out there, who has ever, or will inevitably, sign a player to a massive contract, in any sport, but for the sake of simplicity of this post, we’ll stick to baseball.

What it really boils down to is that it’s easy for partisan fans and/or haters to criticize particular teams whenever they plunk down a ton of money for a single player.  But if you put yourselves in the shoes of the organization, the team, or even the fans of said team, nobody’s really going to care how much money is spent if success is actually achieved.

Criticize the A-Rod or the Heyward deals all you want, the fact of the matter is that the Yankees and Cubs both won World Series with those guys playing.  Although Yankee fans might be less grateful for A-Rod’s contributions, I have a hard time believing people in Chicago were complaining about Heyward’s contract bogging down the Cubs’ payroll while waiting for the championship parade floats to come cruising through in 2016.

Sure, the Kansas City Royals and the Houston Astros fulfilled some Moneyball wet dreams by winning World Series championships with fairly substandard payrolls, but they’re still the exception to the norm, which is usually teams like the Giants paying Matt Cain $20M+ a year, or the Red Sox paying four different guys $20M+, with David Price making $30M in 2018.

Getting back to Bryce Harper, I’ve been asking other baseball fans if they would think his contract would be worth it if the Phillies won at least one World Series in the next 13 years, and not a single person said no.  Frankly, I can’t say that I’ve ever been particularly fond of Bryce Harper, but if the Braves signed him to that 13/$330, but the team won a championship in that span, I’d be thrilled.  I’ve been living in Atlanta for just over 13 years now, and ever since I really got into baseball, there’s nothing more I’d wanted to see than the Braves win the World Series.

And I feel like most any fan of any team that’s been in somewhat of a prolonged championship drought feels the same way, even if it meant knowing their team would be a veritable internet punching bag for trying to win.

Frankly, it’s a better alternative to teams applauding and patting themselves on the backs for their revenues that aren’t being reinvested into the assets that earned them the money in the first place.

So the clock is now running for the Phillies, on whether or not the Bryce Harper contract is successful or not.  But with 13 years purchased, they’ve certainly bought a tremendous amount of time to prove it successful.