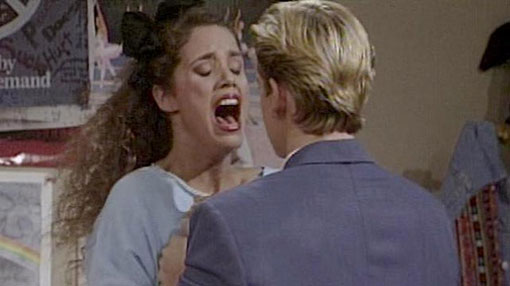 Whenever I take the time to write, it’s usually because I’ve built myself a nice little cushion of time to where I can write, fairly uninterrupted, for anywhere from 45-90 minutes.  That, has not happened in quite some time, and therefore I have not really taken the time to write, which in itself gives me a little bit of anxiety, because I don’t ever want to fall out of the habit of writing, because writing is important to me, and it makes me anxious when I haven’t done it in a while.

It’s literally been two weeks since the last time I sat down and did any sort of writing.  This isn’t to say that there’s been nothing interesting or worth writing about, although I will say that the usual bullshit that occurs in Atlanta and/or Georgia itself has been a little on the dull side or a little too darkly serious side, like the prehistoric anti-abortion laws they’re pushing, which are things that I don’t really feel remotely capable of speaking about.  I ran in my first-ever official half marathon, the Star Wars half at Disney World.  UVA won a national championship in an actual sport (basketball).  Women, main evented Wrestlemania, with Becky Lynch winning both women’s championships from Charlotte and Ronda Rousey.  Tiger Woods won the Masters and proved that winning shit in sports absolves anyone of their personal indiscretions because they’re totally related.  Game of Thrones embarked on their final season, and the Notre Dame cathedral in Paris almost burned down, because bad shit always tends to happen this time of year.

Things, have most definitely been happening all around the world; it’s just that I really haven’t been able to build that cushion that I always tend to want in order to do some writing, because it never seems like there’s ever any time in the day for me do such.  Whether it’s the increased responsibilities and the seemingly endless parade of little and large tasks that I have at work, meetings after meetings, I barely have the time to have proper lunches on a daily basis, much less be able to eat food and type words at the same time.

And then when I get home, whether or not I have to cook dinner or an endless litany of small tasks and daily chores that I feel the need to do in order to have a somewhat kept house, that by the time I’m done with everything, I’m at that awkward point of the day in which I don’t feel like I have enough time to write, or watch anything other than a 30-minute program on Netflix, because I should probably start considering going to bed in order to be a responsible adult and not be tired during work.

In all fairness, I do prioritize some pretty stupid things when I say a litany of little things and tasks, like making sure I do my daily Fire Emblem Heroes missions, or sitting at my laptop and looking at email and doing the rounds of my daily bookmarks.  But then there’s all sorts of actual things that need to get done on a regular basis, like spending time with the dogs outside and cleaning up their shit, doing laundry, and some basic spot cleaning around the home that always seems to suck up 20 minutes at a time for each.

And then I’m out of time.  Wash, rinse, repeat.  Get excited when it’s Friday, but then don’t actually relax during the weekend, because there’s all sorts of odd jobs, wedding tasks, or in the case of more recently, freelance work, and then bam, it’s Sunday afternoon, and I’m already thinking about preparing for the week ahead.

All while my writing has fallen behind, which is never a far thought from my mind, making me keep count of how many days it’s been since the last time I took the time to write anything.

All things considered, this isn’t to say that my life is meaningless or going bad; far from it, actually, it’s just that I don’t feel like I have as much time as I’d like to in order to keep up with writing.  Frankly, I appreciate being busy, but it’s just that it’s feeling like it’s getting to the point where I’m busy to the point where I simply don’t have a whole lot of time to wind down, and feel like life is catching up.

Wedding planning, has understandably taken up the vast majority of my time away from work, as it’s the goal of mythical fiancée and I to do as much as we can on the front end so that by the time June rolls around, there (hopefully) won’t be such a monumental amount of work to do then.  But it’s definitely been a sometimes tiring experience, wrangling people, and trying to get in touch with people, and waiting for people to respond to RSVPs, and basically, dealing with people in general.  It makes me understand why there are some people who elope, or just go have courthouse ceremonies.

But it’s still exciting all the same, and I’m looking forward to it genuinely, and I’m hoping it’ll be a memorable and fun event for all involved, and aside from the obvious, I’m looking forward to getting a lot of my friends together, because it’s clear we’re all at that age where gathering happens fewer and further between, and a wedding seems like good of excuse as any for it to happen, even if it’s for seemingly the last time for another long period.

However, it’s like no matter how much people tell you, and how much expectations we’re told, it never really sinks in until you’re in the thick of things of just how expensive weddings get.  I mean I knew it was going to be a lot of money, but I think what isn’t really explained is sure, there are some pretty hard hitting single expenses here and there, but ultimately, I feel like the bigger drag is the nickels and dimes that I feel like I’m constantly bleeding out over the last few months that are kind of the real pain.  It’s like, just give me some up-front numbers that I can front or ask my dad to help with, so they can just be put to bed and not have to deal with.

That said, that’s why freelance is helping.  A year ago, my tax return and freelance projects were basically fuck you money that I spent going towards large expenses, vacations, wrestling belts and occasional frivolous shit.  Obviously, I can’t talk about it while it’s still in progress, but I’m excited about the project itself, and the money that is coming in after I’m done will definitely be welcome to help recoup some of the money I’ve been fronting for the wedding.

Also, getting back to bad things that tend to happen this time of year, that’s clearly because my birthday is this week.  I’m turning 37.  I actually have stumbled a few times, thinking about this, not exactly being accurate in remembering my actual age.  I once thought that I was turning 38, and had to stop and think about it to remember that I had accidentally given myself another unwelcome year.

But I don’t know what I’m going to do with my birthday.  I never do.  I rarely know what I want, if I want anything, and more often than I’d like to admit, I occasional feel disappointment if the day doesn’t go swimmingly, like I’ve wasted an opportunity to do something cool, but don’t feel like I should have to cash in birthday cards in order for them to happen.  So I try to tell myself that it’s no big deal, despite the fact that I wish I could feel like it was, which might actually make the world around me think it was too.  But that’s not really me, to demand a spotlight.

Whatever though.  I think I feel like I’ve caught things up, up to speed a little bit.  In short, the world is most certainly moving all around us, but in my own little world within it, not a whole lot is really going on.  I work, I come home and do different types of work, go to sleep, and then repeat the next day.  The weekends afford me a little bit more sleep, but unless there’s something planned in advance, there’s not a tremendous amount that different, before the next week embarks.  Life is not bad by any stretch of the imagination, and the fact that wedding planning is consuming the majority of the time when I’m not working is not a bad thing, because I’m hoping it’s going to be memorable in all the best possible ways when the day finally comes.

But damn would it be nice to have a little bit more time here and there, so I can do nothing with it.