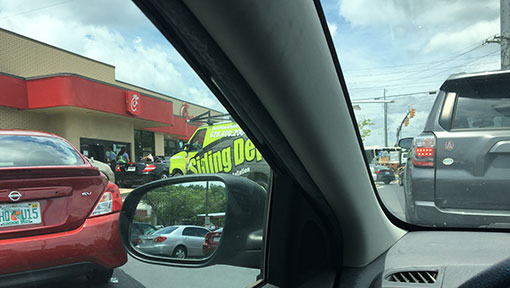 I don’t know how much clearer I can be than that headline.

People who do not utilize the Chick Fil-A app are a class of people that are secondary or subordinate to those who do.  Fact.  Mic drop.  Walk off stage.

No matter what CFA does in the media, its political or religious stance or whatnot, it somehow manages to rise above all other non-food related topics, because simply, their food puts them on a class higher than that of every other fast food chain in the country.  Frankly, I challenge all people to find a CFA that doesn’t have a license to print money or really be able to recall at any point where a CFA closes down due to poor business and not renovation because their demand warrants it.

Go at the wrong time of day, and you will undoubtedly get stuck in some sort of line, be it inside the restaurant, or getting into a drive-thru line that literally wraps twice around the building.  In spite of the insane demand for CFA on a daily basis, I do give a lot of credit to the company for often times being proactive and always thinking on how to speed things up and keep customers happier, regardless of the fact that they really don’t have to, because people will go there for their food, regardless of if the perky teenagers that work the restaurants say “my pleasure” or not.

But just about every CFA in Atlanta has gone down at various points due to the need to renovate, or to add a second drive-thru lane, because they can all justify the needs for them.  They’ll stick employees outside with tablets and card readers in order to help expedite the service.  They’ll stash them in little pop-up tends before the pick-up windows in order to receive cash or give receipts just 20 seconds quicker than it would be at any other restaurant’s drive-thrus.

Most importantly though, they have pretty much the best app in the fast food industry, that’s easy to use, easy to register, and extremely efficient when it comes to saving time and effort.  Punch in your order and send it on, and then there’s zero need to spend time in line deciding on what to order, or to even pay for it, regardless of how many options the physical lines give you in order to save time.  The app saves even more time, and even more effort, and it basically makes it a no-brainer when it comes to deciding on which fast food joint to hit up.

Unfortunately, regardless of the Jesus-ness of the CFA app, inevitably my wife and I are still the only people on the planet who use it, or so it most definitely seems.  No matter how often or not we go to CFA, I have still yet to witness anyone other than us who have actually used the app in person.  Even at the last Dragon*Con I went to, I was amazed at all the people who were willing to stand in line at the Peachtree Center CFA, while I literally walked up and picked up my order in five minutes; and these people are all a bunch of fucking nerds and/or techies, who you’d think would be on top of stuff like apps that would help them stuff their faces sooner rather than later.

Frankly, I’m astounded that more people haven’t caught onto just how Jesus-y the CFA app is.  In the very rare instances where I don’t have much of a queue in front of me at the drive-thru, I can get in and out of CFA in less than two minutes.  I roll up, tell them my mobile order name, and then there’s practically no wait while my order is filled at the window.  Instead, most of the time, I’m the one genius in a line full of morons who don’t even have a clue to what they want until they’ve scoured the entire physical menu, only when they get to the speaker box, and haven’t been thinking about what they wanted in the other 10 minutes they’ve been waiting in line.

And they always begin their order with “I need;” bitch, nobody needs CFA, but it’s a damn fine luxury to indulge in every now and then.

And then they’re usually the people who have to dig through wallets or fish for loose change, because they’re not ready to pay when they get to the window.

The bottom line is, CFA has done everything possible to make ordering and retrieving food as easy as possible.  An easy and intuitive app, drive thru rules that enable them, and an employee process that rewards those who capitalize on all these tools.  Unfortunately, 98% of the population doesn’t take advantage of such easy and time and effort saving methods, and the only ones that are truly punished are the ones who really want to, and we end up in lines wrapped entirely around the building because of their obtuse stupidity.  And this is coming from a guy who didn’t sign up for Facebook until like 8 years after it was open to the world.

I don’t like to often think that I’m really above anything, but . . . those who do not use the CFA app to get CFA, are legitimately beneath me.