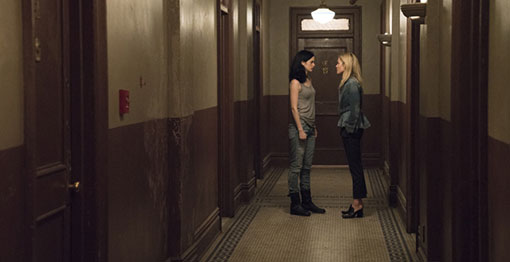 Despite the fact that I personally would rank Jessica Jones to be on the lower tier of the Netflix Marvel Universe, as long as it has that Marvel nameplate at the front of it, I’ll still inevitably watch it.  Considering the fact that I’ve watched everything from Daredevil, the Defenders and even Iron Fist, I had to do due diligence and finish up with Jessica Jones; especially since this was truly the swan song last of the Netflix Marvel series, thanks to Disney starting their own service, this was really going to be the last time we’re probably going to get to see any of the Defenders any time soon.

Overall, I didn’t much care for season 3 of Jessica Jones.  Frankly, it could barely be called Jessica Jones, since 90% of the season revolved around the insufferable Trish Walker and her ascent into becoming the ultra-lame Hellcat, although they don’t actually use the name at all throughout the show, except for one episode title that most people don’t actually read while they’re in the throes of binge-watching a show.

Don’t get me wrong, despite my general ambivalence for the season as a whole, I still recognize the show as still having strong writing, with fairly complex and intriguing storytelling, it’s just that I didn’t like particular character(s), but ultimately the goal of storytelling is to elicit some sort of response from the viewer.  By that regard, Trish was written very well, because it was extremely easy for me to dislike her and all her insufferable traits as a person.  But it was almost delving into X-Pac Heat, to where I was just getting sick of the character, but not quite to where I was willing to walk away from too much Trish.

But I digress a little; if not for Trish becoming so insufferable, it probably doesn’t help the story arcs of Malcolm or Jeri Hogarth, because ordinarily they’re pretty pedestrian characters on their own, but seeing them after 15 minute chunks of Trish bullshit makes them welcome reprieves, and storylines worth caring about, that is, until they collide and intertwine with Trish eventually.

Ultimately, I would rank S3 as the worst of the series, but in all fairness, it felt like it was kind of a set-up season for future seasons in terms of developing characters native to just the Jessica Jones series, without having to borrow so heavily from other shows.  That being said, I was disappointed that the writers didn’t find a sly way to work in a Turk cameo into this season, because frankly he somehow manages to appear in every other show, at least once a season.

Either way, if this is how the Netflix Marvel Universe comes to a close, it’s sad that it had to end with this particular season of Jessica Jones.  Daredevil was still the rock of the team, and Luke Cage’s second season ended with a compelling twist that could have easily kept going for another season or two.  Iron Fist ended with a terribly DJ Tanner Wrestling-shark jumping finish that nobody really needs to see more of unless Netflix was determined to make more Defenders.  The Punisher put a neat bow around the finish of the second season, and in spite of the mediocrity, at least Jessica Jones can take a little solace in having done the same.

As some are aware, the agreement is that there’s like a two-year restriction period with these franchises, so Disney can’t just pick-up the production of any of the franchises that were Netflix-Marvel immediately.  Lots of things change in two years, so I think it’s safe to assume that these properties are for all intents and purposes done for; if I were a betting man, even if Charlie Cox and the guy who played Danny Rand were available to reprise their roles, I’d imagine Mike Colter and Krysten Ritter will move onto bigger and better things, and there’s little sense in trying to get the band back together if half of them are off the table.

So long Netflix Marvel Universe.  Not even Trish Walker could ruin the overall enjoyment that I got out of all the series, and I’ll always look back fondly to how you breathed a lot of quality life into what I once considered a whole bunch of B-level properties.