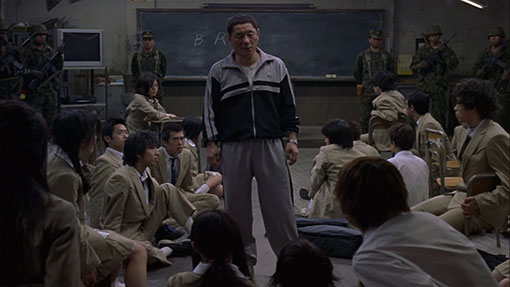 In plot A, one classroom in the entire country is chosen, supposedly at random, where the students are pitted against each other in a fight to the death, where only the last one standing is allowed to live.  It is sanctioned by the government, and the end result is bloodbath with numerous fatalities and a tremendous amount of fear and distrust for the government, for continuously allowing this to happen.

In plot B, one or more public location(s) in the entire country, is/are chosen, supposedly at random, where people armed to the teeth with assault firearms, open fire at crowds of unsuspecting people, where only the people who manage to successfully flee or not succumb to their injuries, are allowed to live.  By virtue of consistently turning a blind eye to the issue of there simply being too many firearms too easily available, it is sanctioned by the government, and the end result(s) is/are bloodbaths with numerous fatalities and a tremendous amount of fear and distrust for the government, for continuously not doing anything about it.

The ironic thing is that not only is plot A obviously Battle Royale, but it’s also a work of fiction.  It’s a singular, annual event that happens once in a calendar year, and once passed, the students not selected throughout Japan can kind of exhale and breathe easy knowing that they’re safe from having to compete for their lives in a merciless death rumble.

Unfortunately, plot B is not a work of fiction, it is reality, and Americans do not have the luxury of being able to breathe easy once the last mass shooting happens, because it’s potentially viable to happen again, at any given time afterward.  It is also not exclusive to solely schools, although schools have typically been a frequent location for several of these horrific incidents.

In the past week (read: seven-day span), there have been four (read: FOUR) incidents where shooters opened fire on unsuspecting crowds of people.  They happened in California, New York, Texas and Ohio, ranging from a festival, to a park and to two shopping centers. Numerous people were killed, and many more were injured.

Unsurprisingly, the government has sat on their hands throughout all of this, and gone through the motions of condemning those monsters who would do something like this, and of course, to offer up their thoughts and prayers for those families affected by these tragedies.  But naturally, they have not and will not, do anything about the rampant availability of firearms, because weapon manufacturers are obviously paying these talking heads to continue talking but not much else, while in deep recesses and dark corners throughout America, psychos are amassing large arsenals of military grade weaponry while writing up their manifestos of death while seething over the existence of people unlike them, waiting to hit the boiling point in which they finally decide to enact on their rage and start shooting at innocent people.

Honestly?  There’s really nothing else to add to this.  Mass shootings are nothing new and are ironically a way of American life these days, so frankly I have nothing else to really say that hasn’t already been said by millions of other like-minded Americans who are simply fed up with feeling unsafe in their lives, and feeling like the people running their own country don’t have their backs because they’re looking out for their own self-interests ahead of the people.