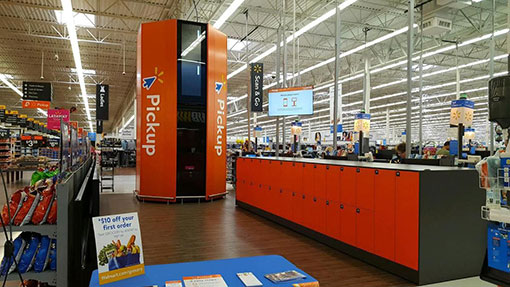 An interesting thing happened the other day: I went to a Wal-Mart and the experience did not completely suck.  Nor did it magically evaporate 30 minutes of my life that I’d wish for back once I vacated the premises.  I parked, entered the building, picked up my purchases, and I was back out the door in less than five minutes.

Thanks to these gigantic, orange obelisk-like technological marvels, Wal-Mart created a system where customers like me could pay for our stuff online, and pick up our goods at the store without the need to interact with the worst part about going to any Wal-Mart in the first place – people.

When mythical wife made an online purchase with a store pickup, and then asked me to make the pickup, my initial reaction was like OJ Simpson cringing in the courtroom; the idea of going to Wal-Mart is tantamount to being asked to go to Christmas mass.  It’s just something I really don’t ever want to do, but given the need to begin amassing as many diapers as we’re likely going to need, it was a necessary evil.  Frankly, if I had to go to a Wal-Mart in the first place, I went ahead and capitalized on the same deal mythical wife did, and placed an order myself, because we may as well get double the diapers if I’m going to make a single trip.

I assumed I’d have go to the dreaded customer service line where there would inevitably be a mix of people attempting to return something they obviously used but are trying to spin as being defective, someone trying to cash a paycheck and bitching about the unreasonable fee that they’re collecting to do so, or other schlubs like me picking up online orders, but probably weren’t even remotely close to being fulfilled.

But when I arrived at the Wal-Mart in question, there were all these orange signs with arrows pointing to online pickups.  Perplexed, I followed them, and once inside the building, they all pointed at this giant orange colossus standing 20 feet tall near the registers.  There wasn’t a single person by it.

I walked around it a few times, trying to figure out how this was going to work, and then suddenly this panel slides up as if I had matched the right crests to the fireplace mantle in Resident Evil and a control panel was exposed.  Among the tech was a barcode reader, and lo and behold my order confirmation had a barcode.  I scan the sucker, and then suddenly there’s more movement in the giant orange Tower of Babel and in seconds, another hatch opens up and there’s my first order of diapers, waiting for me to collect.

Slightly amazed, I pulled up the second barcode and did it again, just to see if the first go-around were a fluke.  Much to my surprise, it went as smoothly as the first one, and within seconds, I had a second parcel of diapers.  And just like that, my business at Wal-Mart was done, and I didn’t know how to process the fact that I had been in the store for all of like, three minutes, and I was done that quickly.

I actually stood there and debated on going deeper into the store and possibly buying something else, just because I hadn’t wasted a half hour inside of it, like one typically does when entering a Wal-Mart.  But cooler heads prevailed, and I was out the door and off the property in less than five minutes.

Frankly, these magic orange towers make the Wal-Mart experience somewhat palatable, and would actually make me consider them as an option again in the future.  However, that being said, when this supposed next time actually comes to fruition, the orange towers will probably all be busted and inefficiently operable, and then it’ll be back to avoiding and regretting Wal-Mart all over again.  But we’ll cross that bridge when we get there.  Let’s actually let this story about Wal-Mart end with something of a win; this time.