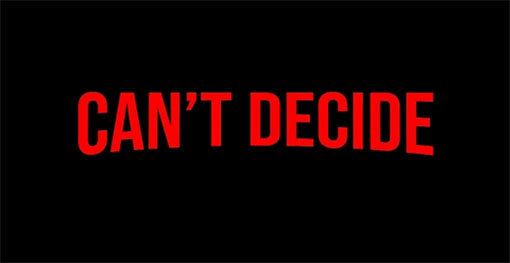 More often than I’d like to admit, I run into the scenario where I sit down with the intent to watch television, but then burn 30 minutes solely looking for something to watch, before deciding that what I do want to watch will exceed the time of day in which I want to be getting ready for bed.

Primarily, I use a Piss4 or XBONE to watch television, and between two consoles, I typically am skimming through Netflix, Amazon Prime Video, WWE Network, HBO Go, ESPN, TLC Go, or whatever network app the sports game I want to watch is airing on.  And then there’s PLEX where I’m connected to two different servers chock full of content that may or may not overlap with the shit available on all other mentioned media options.

The wife and I haven’t even plunked down for Disney+ yet.  That’s another trillion hours of content available if and when we do.

Needless to say, it’s easy to burn all my time searching for something to watch instead of actually watching something, because when the day is over, and I know that I’m far from the only person who feels this way, but there’s just too much god damn content out there, and not enough god damn hours in any day to watch all of it and actually stay on top of things.

Whether shows are being churned out, or acquired from overseas and distributed in America, it seems like every single time I turn on the television, there’s always a whole bunch of new shit that’s available to watch, and all I can really do is [add to list] everything and then continue browsing titles and watching previews in hopes of finding things that are so compelling, they’re capable of breaking the browsing cycle and be watched immediately.

But most of the time, things are just [added to lists] and then never get watched, not without a tremendous amount of effort and determination.

Anyway, what spurned this brog post was this article I read about how Netflix is experimenting with a feature that would enable viewers to watch things in 1.5x speed, so that shows and movies can be watched in ¾ of the time instead of the full allotted run time.  Needless to say, the mere thought of this has not gone over well with the Hollywood crowd, with numerous writers, directors, actors and other contributors all going from zero-to-SJW levels of hostile in criticism for the notion.

Although I can see both sides of the coin in this conflict, when the day is over, I have to side with those who create the content; it’s wholly disrespectful and a slap in the face to even offer the ability for people to fast-forward their stories and performances, all because the sheep of the world are actually beginning to see the precious commodity that is our time.

I understand that people want to be able to imbibe in the entirety of series with 75% of the time investment, because who wouldn’t love to be able to stretch their days further, and get more time back?  But from my perspective, watching media is also something that should require a commitment, and typically when I watch something, I want to enjoy it in its genuinely intended form, and not with everyone sounding like The Chipmunks.

Ultimately, at the root of all this, I think this isn’t even a problem if not for the fact that there just is simply too much content out there available to the world, that it’s created this artificial need for people to want to be on top of everything, and basically cheating their way in order to do so.  If there weren’t a hundred new shows dropping every single week, then people might actually watch the shit they [put on my list], at normal speeds, and not feel the anxiety of a superficial list of media growing and feeling the need to watch them in fast-forward just to catch up.

Like seriously, did shit like Good Boys or The Dead Don’t Die even need to be made?  Does David Chang really need to make yet another show that’s supposed to be about food but is more like a celebrity circle-jerk around jet-setting and eating regional cuisine?  I love the Rock, but how in the blue hell does Ballers somehow make it to five seasons?  And why does all Korean television have to be like 26 episodes of 90 minutes per, for a season??

The point is, there’s just too much shit out there now.  Frankly, I believe that every single media outlet could probably take all of 2020 off and drop zero new shows or movies at all, and by the time 2021 rolls around, people still won’t be caught up with all of the shit they’ve been meaning to watch but never had the time.  At least not without some serious bingeing efforts.

I read this article not long ago, which almost made me write this post back then, but then I got lazy and didn’t.  About how Disney+ is helping kill television, by adding a gozillion more hours of content to the 20,000 Leagues Under the Sea-deep pool of streaming content.  I might not use the word “kill” but it’s definitely not helping the sheer amount of choice paralysis that everyone endures on a regular basis.

I can’t wait in the future when some company decides to aggregate the most popular content from all of these apps and platforms, and offer them as an all-inclusive comprehensive bundle, at an economical monthly rate.  Because it’s easier than having 15 different apps on three different devices.  They can call it “cable.”