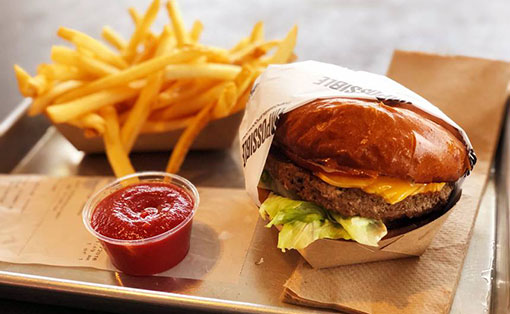 It also doesn’t help that maybe it’s just Georgia, or the general state of Burger King as a company, but I realized it’s pretty challenging finding nearly as many Burger Kings these days as there are just about any other fast food joint out there.  Needless to say, I ended up waiting a little bit before I would get my chance to try one of these hamburgers of myth.

But over the weekend, I finally got to try one.  Mythical wife took me to the restaurant she had in mind where I should try one, and I was pretty excited to get to try it finally.

Honestly, if nobody ever told me that what I had eaten was an Impossible Burger or any other plant-based, meatless hamburger, then I probably wouldn’t have been able to tell the difference.  It tasted like a hamburger, the consistency was that of a typical hamburger, and like I said if I didn’t know it wasn’t actual meat, then I would’ve just figured I had a regular beef hamburger.

In all fairness, I have a tendency to like my burgers pretty loaded, so what I had eaten was with lettuce, tomatoes, pickles, grilled onions and ketchup and mustard, so the general flavors do get jumbled up in some bites.  Admittedly, there is a slight flavor difference in the patty itself, but it’s pretty miniscule and I ask myself if I’d even have noticed it if I didn’t already have in the back of my mind that what I was eating wasn’t beef.  It’s kind of a slightly more earthy flavor, which isn’t necessarily bad, but it’s the tiniest hint that it wasn’t real beef.

Overall, I was very pleased with the Impossible Burger, and without question I can comfortably say that I could eat it again.  Frankly, this still makes me want to seek out a Burger King and try an Impossible Whopper, so I can get the other end of the spectrum at a fast food joint to see if the quality still holds up.

Ultimately, I feel pretty confident in saying that if there were ever a scenario where all beef vanished from the planet, and Impossible Burgers were the only alternative left to the idea of the hamburger, then I don’t think I’d really lose much sleep over it.  Despite my life’s history of demonstrating a lot of carnivorous tendencies, I have no objections to those who live their lives alternatively to eating meat.  Frankly I don’t disagree with the notion that if everyone ate a little bit less meat, overall health would probably improve; this doesn’t mean that I’m going to absolve myself of barbecue, Korean bbq and other reckless meat binges, but I can easily come to peace with the idea of eating less meat as a whole, and alternatives like Impossible Burgers make it optimistic that we’re not going to be reduced to eating heads of lettuce and whole artichokes.

I mean if Arnold Schwarzenegger can come out and talk about how he, the once manliest man on the face of the planet, can reduce his meat intake in favor of revolutionary alternatives, there’s no shame in other people adopting the idea that every meal doesn’t have to be a porterhouse steak, not that there really was one in the first place.