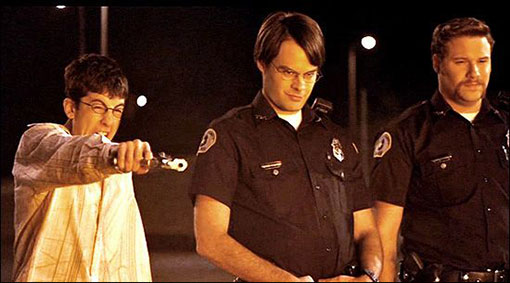 In other words, Georgia is trying to make it completely legal to show that you have a gun in order to attempt to deescalate a conflict, but not necessarily point it at another human being.

Yeah, that’s really going to go over real well; especially when jobber A flashes that they have a piece during a heated argument over the last $16 waffle maker at Walmart on Black Friday, and then jobber B responds by flashing their larger, more powerful piece.  Surely, the hypothesis is that jobber A will immediately stand down and forfeit the waffle maker to jobber B and then everyone will resume what they’re doing peacefully.

But the reality is that the two of them will eventually reach this uncomfortable and tense stalemate before one of them inevitably breaks the law and flashes it at the other, causing mass hysteria around them, before the highly armed and concealed-carrying rest of Georgia all begin brandishing weapons all around and then Milledgeville ends up on the news for the first time since Ben Roethlistberger raped a chick way back when.

Seriously, this is some only in the south kind of shit logic, and if there were ever any more proof that industries like firearms have their hands in the pockets of old white men in political power, dry rubbing their flaccid old dicks, it’s stories like this, because in no scenario in the world involving people who are not law enforcement, does the introduction of firearms ever have a chance at hell at deescalating anything at all.

Digging deeper, I love how the impetus behind this ridiculous bill is that the previous punishment for brandishing a weapon is a 20-year felony, and a bunch of hicks decided that they shouldn’t have to go to prison for two decades because they have a gun and want to show it off.  So why not just change the fucking law?

Anyway, I look forward to the statistics that will never be published where gun violence actually goes down as a result of laws like this.  Or the amendment where it will not-so subtly exclude black people from this law and in fact make it a 25-year felony for the colored folks for even saying the word “gun” around old white people.