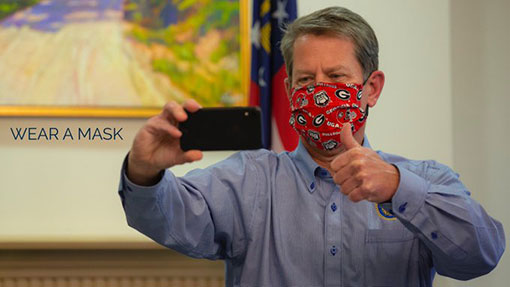 In an obvious case of no shit you fucking idiot, Georgia’s imbecile governor by way of flagrant voter suppression, Yosemite Sam, extended the state’s public health emergency for several more months, as coronavirus numbers throughout Georgia continue to rise.

I’m not saying that I’m happy that the state’s coronavirus numbers are going up, but considering our dumbass governor’s maverick behavior of re-opening the state before everyone else, I kind of hoped this would happen, to validate his obvious stupidity, and shove his arrogant redneck bravado down his straw-chewing phony smiling throat.  I’m actually a little disappointed that other states spiked before Georgia did, but as long as Brian Kemp was proven wrong, and is forced to backpedal and basically put the state back down on some degree of stay-at-home measures, then I guess I can be satisfied.

What’s fascinating but not surprising to me, is how Bubba is now all about wearing masks.  Prior to recent events, he was all about emulating his lord-king, the baked potato in charge, and doing whatever it took to stay in his good graces.  But somewhere along the line, getting questioned by his lord-king when he re-opened the state like an idiot, and perhaps the hypothetical notion that it might be in Bubba’s best interests to distance himself away from the baked potato finally, and begin to actually posture himself in his own fucking image, he’s now all aboard the everyone should wear masks train, like a human being with an actual brain.

Regardless, Georgia is back aboard the train of being closed without it officially being closed.  Yosemite Sam would never admit to the fact that he fucked up, but in a pitiful attempt to save face and seem like he actually gives a shit about his constituents, he’s going to go around and put masks over like Mick Foley puts everyone on the planet over if they just give him some screen time.

Let’s not forget though, that Georgia probably should never have come out of lockdown in the first place if not for our idiot racist bigot governor, but what’s done is done.  Ultimately, I just wanted to put down a bunch of words to express my general disgust and disdain for Bubba Kemp, and if he were to ironically become afflicted by coronavirus on account of his own stupidity, well I can’t say that I’d be the least bit saddened by his demise.