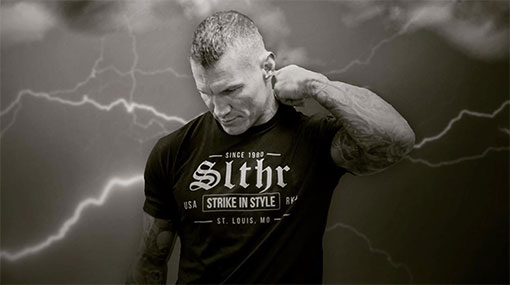 Perusing through my news feeds, I came across this story that detailed how WWE wrestler Randy Orton has apparently released a clothing line, known as SLTHR; presumably as in “slither” because his in-ring persona is that of a snake-like aggressor who cannot be trusted and strikes quickly.

After looking at his announcement image for five seconds, and the painfully low-effort design of Old English typeface, and the horrible utilization of the no-vowel spelling of words as if we’re trying to go back to Aramaic, and my face literally did the Steve Carell from The Office face meme.

Holy shit man, it’s hard to really put into words just how terrible the idea of Randy Orton clothing is.  It’s awful because in all the years Orton has been on screen in non-gear attire, it’s always douchey bro clothing, and it basically validates the blurred line between character and person that Orton’s personal clothing line is basically the same kind of crap.  It’s awkward because as much as Orton loves to pick fun at wrestlers with indy pasts or those who he feels has not made a respectful amount of money in their careers, a guy schilling out his own apparel seems a little desperate to be making more money himself.

And it’s just plain bad, the way it looks, how it’s branded, and how it’s “announced,” over social media.  If the one shirt is any indication of what any other products are going to look like (I can’t under good consciousness make any conceited effort to check out the rest), I wouldn’t be too optimistic.  I’ve never actually see anyone wear a WWE-licensed Orton shirt in public before, not even ironically, so I have a hard time believing anyone would be willing to actually spend real money and purchase much less wear Orton’s SLTHR crap either.

Another funny thing to me is that this is barely a week removed from where Vince McMahon himself put the company on blast, to tell all wrestlers to stop using their WWE gimmicks and likenesses to try and profit on shit like Cameo, Twitch or any other third-party creative outlets.  Orton is notoriously infamous for being coddled and protected by the WWE, and numerous wrestlers past and present have all insinuated all the rules he’s been allowed to bend and outright break, on account of his privilege, and this is turning into a glaringly prime example of just such.  Sure, “Randy Orton” is actually Randy Orton’s name, and there’s nothing against the rules of him using it to sell his own shit, but the optics of this combined with the eggshells all his other peers are walking on certainly doesn’t help the overall picture.

Overall, just everything about this is cringeworthy and turrible.  For a guy that is currently being billed as the greatest wrestler of all time, it reeks of desperation, and much like Orton himself, seems so very flat, boring and completely lacking in creativity.  But hey, if there are any wrestling fans out there that get put into the friend zone of anyone they’re unrequited crushing on, at least now they have an official shirt that can wear to really drive home the reality of the situation.