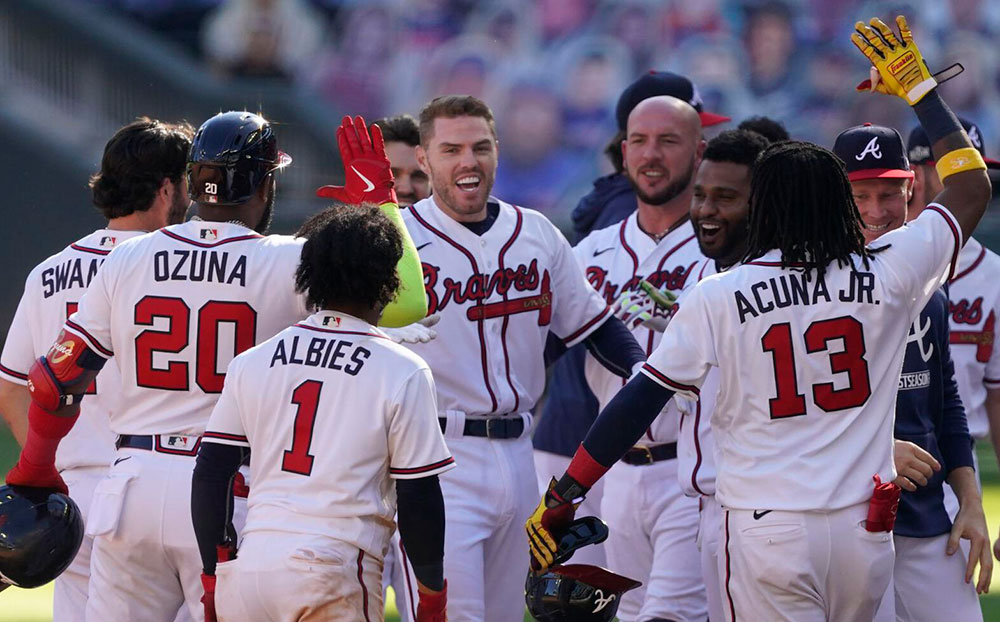 It doesn’t mean anything to me: the Atlanta Braves defeat the Cincinnati Reds, win their first postseason series in 19 years*

*it only required a global pandemic to wipe out 102 regular season games, Major League Baseball to reconfigure the entire playoff system, and adding a third round to allow for even lesser competition into the postseason in a best-of-three, played entirely in Atlanta for this to occur

Don’t get me wrong, I’m always happy to hear when the Braves win baseball games (except in those years where I was rooting for them to lose 100 games), and it is still a life’s want, to see the Braves win a World Series.  But as I’ve documented throughout the years, there is just too much history, too much failure and just well, too much Atlanta, for the Atlanta Braves to have to overcome in order to get to the top of the mountain, ever again.

But make no mistake, this barely counts as a breaker of history.  In an ordinary season, the Braves would have been paired up against the #3 seed Cubs, who are notorious chokers in their own right, but have actually sniffed success within the last decade, and the last time these two teams met in the playoffs was in 2003 when the lower-seed Cubs upended the 101-win Braves in five games.

The Braves winning a hackneyed, made-up playoff matchup surely doesn’t, and shouldn’t really count as breaking history, as much as ESPN was careful to word their phrasing as to make is accurate as possible.  Sure, the Braves won a postseason series, but again, missing from the statement is all the context that I was gracious enough to provide.  It doesn’t really count to me.

The true test really is how the Braves fare in the next round, which would ordinarily be a first-round matchup in a typical season.  And at the time I’m writing this, the Braves would be paired up against the aforementioned Cubs, or the Miami Marlins who shouldn’t even be close to being a playoff team in an ordinary year.  And in a real best-of series, the Braves’ lack of starting pitching would undoubtedly be exposed by the Cubs, and regardless of how well the Braves have handled the Marlins in the regular season, playoff Marlins have historically been championship-caliber world beaters, so it’s hard to say who I’d rather see the Braves get paired against next.

Regardless, for what it’s worth, in spite of all my pessimistic bitching, this does open up the dangerous Pandora’s Box of having hope that this might be the year, that maybe a team like the Braves could benefit from the springboard of a layup playoff series and use the momentum to carry them past the next round, and the one after that, and even further.  I know it’s reckless and silly to think about, especially since I can’t drive home the fact that the Braves have NO STARTING PITCHING, but we wouldn’t be sports fans if we didn’t admit to such fantasies from year to year.

One thing is for sure though, my theory of THE BABY YEAR is still alive and in play, and if there’s one thing that supersedes my want for a preferred team, it’s the want to BE RIGHT.  It just so happens that one of the teams in play for BABY YEAR is my team; unfortunately the other one is mythical wife’s year, as the Yankees too, have advanced out of the minus-first round, beating the hapless Cleveland Indians in Cleveland.

Watch this be the year that the Braves and Yankees meet in the World Series, so that not only will BABY YEAR remain in play, but create the ultimate of awkward, troll and insufferable scenario in my household, that the Yankees will undoubtedly win, because they HAVE STARTING PITCHING.  BABY YEAR still comes true and validates my theory, but the Braves also lose, which makes me emo and dejected.

Oh well.  I don’t think that next year will be any better as far as reigning in the pandemic goes, so who knows, maybe the Braves can try and fail next year too.