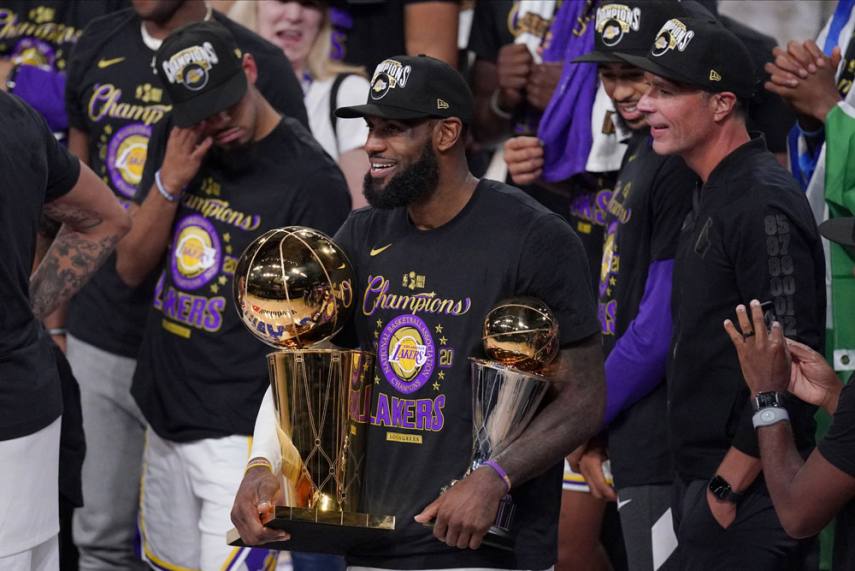 Whether you like LeBron James or you don’t, what can’t be disputed is the success he’s had throughout his career.  After winning his fourth NBA championship, with his third different franchise, I think it’s safe to say that he’s on a platform that not even guys like Michael Jordan and Kobe Bryant can measure up to him.

Obviously most everyone in the sports world is generally under the belief that MJ is the true Greatest Of All Time, and if there was ever a person in history that would have come close to the crown, MJ himself basically said it was Kobe.  I don’t disagree with Jordan being the GOAT and that Kobe was the closest thing to the Heir to Air, but at the same time, I really began to think that there was a lot of deliberate disrespect sent to LeBron while these claims were made.

I kind of get it too, I thought LeBron was pretty shitty when he jumped to the Heat, and had the whole The Decision spectacle, but as time as passed, and his body of work has expanded and grown, and we’ve seen the kid grow into the man he is today, and all I really want to say these days is, fuck the comparisons to MJ or Kobe, LeBron is just out there being the greatest LeBron there could possibly be.  The GLBOAT.

Because when the day is over, LeBron is never going to get the respect that MJ or Kobe ever got.  So, and I’m guessing he’s already figured it out himself already, he’s fine with that, and he’s simply carving out his own legacy that doesn’t measure up to them, and raising his own bar, that will be the measuring stick for all sorts of future players to try to aspire to be the GOAT or the GLBOAT.

I’m not doing a particularly good job of explaining this, so let’s take a different approach and flip the script, and try and compare MJ or Kobe to LeBron.  Rings?  Check, MJ and Kobe both have their six and five championships each, which is more than the four titles that LeBron has.

But to me, the most impressive thing is that LeBron has won all of his with three different franchises, one of them being the sports woeful Cleveland Cavaliers.  Sure, in all three of their cases, their teams would build teams around their respective superstars, but there’s something inherently more challenging about LeBron having to start from scratch with each move, and in spite of the sheer super-teaming that occasionally occurred, there’s still a matter of jelling with his new team(s) and building teamwork enough to win championships.

Sure, LeBron has one short of Kobe and two to MJ, but he’s still active; who’s to say he doesn’t opt-out of Los Angeles and decide he wants to try and ice his legacy by winning championships for like, the Utah Jazz or maybe the ultimate challenge: the New York Knicks?

Anyway, MJ and Kobe won their rings with single franchises, to which there’s a milestone of greatness when a guy stays with a single franchise their entire careers, but at the same time, it’s also impressive as hell that LeBron has bounced to three different places and brought championships to all of them, and not in like a Robert Horry-role player capacity, but as The Man for each of them, winning Finals MVP each and every time.

Moving on, MJ was a degenerate when it came to gambling, and he most definitely had a gambling problem, which may or may not have caused the murder of his father, and as much as the world acted as if the pope died when Kobe did, a lot of people choose to forget that he basically raped a woman in 2003.  LeBron has no such dirt underneath his fingernails, and been way more philanthropic throughout his career than the guys everyone tries to measure up to him, like when he built a school in his hometown of Akron.

Not that it has any reflection on basketball talent, but whereas LeBron James chooses to use his voice and vocalize his thoughts on social unrest and the importance of making right systemic racism, let’s not forget that Jordan once was quoted saying “Republicans need shoes too,” as justification for not speaking out against racism in North Carolina, where his alma mater and legacy basically started.  Kobe, save for a few shirts he wore, was mostly as silent as MJ was, partially because of a Jesus-complex and that he didn’t exactly have any moral high ground ever after, raping a woman.

I think what it all really boils down to is the fact that LeBron may never get the credit for being the greatest basketball player of all time, but when the day is over, he’s going to have stats and accolades that will make him untouchable in his own right, even by MJ or Kobe, and although people will always put them above LeBron, I think it’s safe to say that as people, LeBron is just a better person, than they were.  And that’s just a little bit more important than being great at basketball.