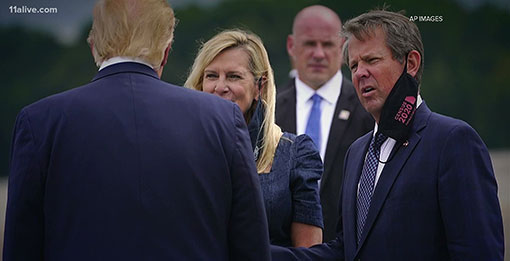 More specifically: after losing Georgia to Democrats for the first time since Bill Clinton, the baked potato publicly lashes out at Georgia governor Bubba Kemp for not helping him cheat to win, states he is ashamed to have ever endorsed him

Actually the headline is a little inaccurate, as it’s more accurate to say that the baked potato has turned on Bubba, while Bubba, in typical Bubba fashion has cowered completely to his lord king in chief and has gone completely silent in response, like a scared cat that just saw a cucumber.  Just like he went completely quiet after the baked potato publicly lambasted him after “reopening” Georgia way too soon amidst the pandemic, he’s basically in hiding until the heat dies down.

There’s really not much more to say about this, honestly.  Baked potato is just steaming because he lost Georgia, a state that’s historically almost automatically red, and for the first time since I’ve lived here, I can really say that I’m proud to be a Georgia resident.

I wrote a few more paragraphs but Word shit the bed on me and lost it all, and I have no desire to re-write any of it because it’s about politics and once is too much as it is, so I’ll just leave it at the fact that I love watching shitheads turn on each other, and it’s great to see them flaming each other instead of respectively griefing the state and the country instead.