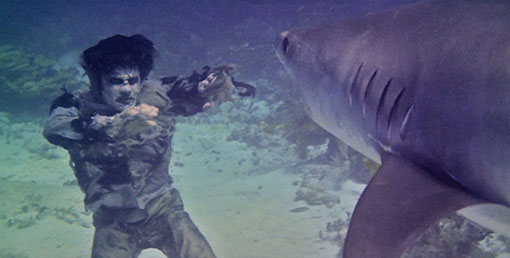 When I saw the clickbait headline on social media for this, I of course clicked it, but I already knew that this was going to turn into a brog post: Dr. Mario releases what ultimately becomes a zombie shark, off the coast of Spain

To horror fans, all one has to do is say the words “zombie shark,” and literally only one thing pops into their minds: Lucio Fulci’s Zombi 2 film, that very notoriously, contained a sequence, in which a zombie takes on, a shark.

Spoiler alert, as if anyone’s going to read this, drop what they’re doing and rush out to go find out how and where to watch Zombi 2, but the shark rips off the arm of the zombie and more or less “wins” in the sense that it swims away still living.  However, the zombie definitely succeeds at ripping a chunk off of it to eat, but it’s fairly unclear that it landed any actual bites onto the shark, since sharks skin are pretty tough.  But the zombie is all over the shark for some bit of time, so it is presumed that it probably had to have gotten some bites in before its arm is ripped off and the conflict is over.

Well, it only took 42 years but it looks like we’ve got our answer to that specific scene from that documentary.  Clearly, the zombie got some bites in, or perhaps it’s by virtue of the shark ingesting some of that wack-ass green zombie blood, but it clearly got turned, was caught by Dr. Mario, presumably studied because it was a fucking zombie shark, and then released into the wild, where some other sharks whooped its ass, leaving it to actually, ultimately die, finally.

Really though, I’m not sure why it’s some sort of shocker that a shark that’s all mangled open is still searching for food.  When they’re at full health, it’s all sharks do in the first place, I’m not sure why one being practically ripped open would behave any differently, than to seek out food before it eventually succumbed.

All the same, good on the internet for giving all us zombie fans reason to make the never-not entertaining reference to Fulci’s zombie vs. shark, because even to this day, there’s never been a more wildly insane fight sequence than this was.