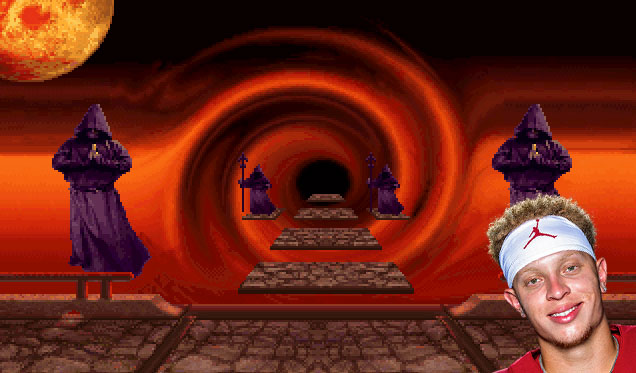 Over the weekend, my father-in-law was giddy with excitement over the news of Oklahoma quarterback, Spencer Rattler, transferring to South Carolina, via the seemingly most common words at the end of every college football season, the transfer portal.

Firstly, I can’t not hear that phrase and not imagine that the transfer portal is portal stage from Mortal Kombat II, where college ballplayers all show up and mingle around, with hopes that they’ll land at another school where they can either play for a contender, start, or go anywhere where they can hedge their bets and put up gaudy numbers in preparation for a future NFL draft.

Secondly, when the transfer portal really began becoming a thing within the last 4-5 years, I actually hated the idea of it.  It basically turned into the equivalent of free agency for college athletes, and further fed the narrative that these athletic ringers all give no shits about education at all, if it already wasn’t clear enough but purists and romantics like me can hope.

But it really began picking up steam when the most notable cases were players who were just seemingly looking to gravy train their way to powerhouse programs, and were just kind of this rich getting richer circle jerk among notable contending teams.  But then it seemed like every Tom, Dick and Harry players were jumping into the portal to try to land somewhere else, regardless of if it made sense or not.

Like Justin Fields who went from Georgia to Ohio State; that made sense.  Fields was blocked by Jake Fromm, and he was a phenomenal talent that needed to go somewhere where he could flourish.  Jalen Hurts and Kelly Bryant transferring out of Alabama and Clemson respectively made sense, since both of their schools had benched them for the hot new freshmen.  But then you have cases like Josh Jackson, who was mediocre at best, transferring from Virginia Tech to go to Maryland where he vanished into obscurity.

The point is, commitments from players have all but become meaningless in the grand spectrum of college ball, because over the last few years, there’s been little reason why anyone would stay anywhere for more than two years, for any reason.  As far as I was concerned, the transfer portal wasn’t really something that was healthy for the game, in general.

All the same, with Rattler joining the Gamecocks, it does open the door for some intriguing storylines next season.  I haven’t really paid any attention to any sports over the last year or so, but from what I can interpret, a large part of him choosing South Carolina had much to do with Shane Beamer, a former coach at Oklahoma, being there, and him wanting to play for him again.

I don’t know how much of it is actually happening or if it will happen, but from what my father-in-law said, it sounded like there was a good chance that South Carolina could land several other Sooner transfers out of the portal, and there was the possibility that suddenly the South Carolina offense would turn from the Gamecocks into the Sooners, which would definitely spice things up in the ever-contentious SEC.

And from a strategic standpoint, it is definitely interesting the prospect of South Carolina suddenly becoming an instant contender, to stand up to Georgia and Alabama, who have pretty much owned the SEC for the better part of the last decade.

It looks like a good example of how the transfer portal could really be exploited, if there is enough collusion and collaboration being done behind the scenes.

Undoubtedly, if cases like this continue to occur, the rules of the portal will be revised and tweaked to prevent mass migrations and the collections of potential super teams in college football, but until they are, things like the South Carolina Sooners were always bound to happen.

But until changes are made, I have to say, I’d be intrigued by the potential storylines of a gathering of players who will want to try and be the first players to win national championships in multiple conferences for multiple teams.  Or maybe a group of guys that are second stringers for like, Arkansas, decides to collectively transfer to an FCS or even a D-II school, where they can blow up weaker competition and become champions in a lower field.

Or, the real coup would be, a group of players all from different schools, but from a general similar region, all collaborate behind the scenes to hit the portal at the same time, and all land at one school, where they combine to form MegaZord, blow up the competition, and win a national championship.

With college players now eligible to basically get paid via NILs, they have more incentive to stay in college and have more time for shit like this basically occur.  Especially for those fringe players who are all college good, and have no real NFL future, best to try and live up as much glory as they can, while they can.

Let’s hope the transfer portal rules are fixed up before anything like this happens… maybe?