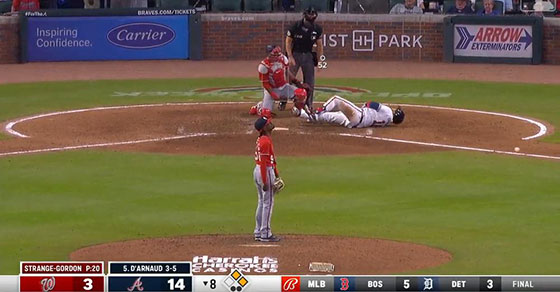 Over the last few days, I saw some highlights from a Rays game where an outfielder was pitching, which meant that the score was already way out of hand, and the team just wanted to save the bullpen as well as have a little bit of fun.  I’m not sure if the guy was deliberately trying to make a mockery of pitching, but it was still interesting to watch his goofy forward leg kick push off the mound while he lobbed 46 mph lollipops.

And just a day later, the Braves were blowing out the Nationals so badly that the Nats sent Dee Gordon whom I had no idea was even on the Nationals now, to pitch.  And in one of the already iconic moments of the year, he accidentally plunked Travis d’Arnaud with a 52 mph soft pitch who flopped like a World Cup-level futbol player, bringing laughter, joy and entertainment to everyone who had seen it.

We’re not even 4-5 games into the season, and teams are already getting blown out to the point where position players are coming in to save the games, as in give us something to be entertained about, other than an embarrassingly lopsided score.

The thing is, despite the fact that these position players are hurling these slow-ass meatballs, they are still accomplishing the job of keeping the game moving forward, and generating outs.  To some high-level logic, you’d think that Major League Baseball players, the supposed crème of the crop when it comes to baseball talent in the world, should have a field day with all these garbage pitches, and sometimes they do, but still, a lot of the time, the guys are still running into outs via groundballs or some hard-hit flyballs.

Like, I’m fairly confident that if I myself, took the mound at Busch Stadium in St. Louis and faced a prime Albert Pujols ten times, sure he’d probably knock six home runs off of me, but I’d probably still manage to get him to smash some hard hit grounders or flyballs and make four outs.  On the greatest player of a generation.

What I’m getting at is the reality that baseball is still a tremendously difficult sport, and no matter the level of skill an MVP-caliber player has, they’re still failing 70% of the time to not make an out, and when you see major leaguers going up against a hapless position player on the mound, this is where it’s more prevalent than ever just how much luck is still involved in playing baseball.

Yet, the vast majority of Major League organizations pay out the nose for guys who might defy luck just a little bit more than their counterparts might.  I haven’t said much about the resolution to the strike, primarily because of time, but naturally I hit the nail on the head when it came to the obvious fact that it was all about rich assholes trying to make more money, in all parties involved.

Guys are paid for luck basically, which seems pretty sill in the grand spectrum of things.  Even the league minimum was raised to an absurd $700,000, so that means the last guy on the bench, who’s usually the worst hitter on a 25-28 man roster, is clearing more than half a million dollars to succumb to luck more than everyone else.  Bless this country for having so much wealth distribution to where shitty ballplayers can make more than medical heroes and world class educators.

But that’s baseball, and well, professional sports in general.  A bunch of guys living the dream, of being marginally better at not failing than other people, to where they can make gobs and gobs of money to play children’s games.