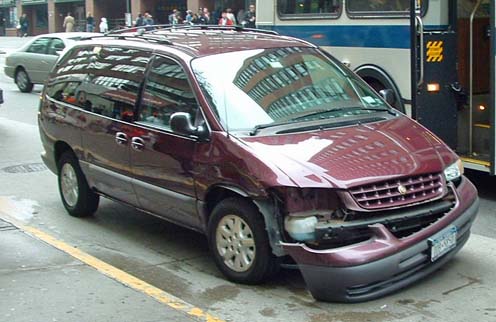 A few nights ago, I had a bad dream which involved me rear-ending a minivan.  I awoke in the middle of the night as a result, because the grief of getting into a car accident and the resulting fallout stressed me to the point of waking up.  The situation was simple – I was behind some woman who couldn’t drive (big surprise), and in my frustration, I was following her a little closer than I normally would follow a person.  We turned right onto a road that was going downhill, and then suddenly the woman slams her brakes, and I’m too late myself, and I end up plowing right into her car.

Usually when a dream like this, that involves car accidents occur, I tend to get extra paranoid that I need to be especially careful when driving around, because it could be a sign of some sort.

Today, I decided to drive around for a few minutes, and take the long way back from lunch today.  As I’m nearing work again, I pull up to an intersection behind a maroon minivan, and for whatever reason, she comes to a complete stop at a green light.  I honk my horn, and she responds by applying her right blinker.  The light then turns red, and I’m now pissed.

Furthermore, the opposing traffic was halted by left-turning vehicles, which meant that the lady in the minivan had more than adequate time to make the completely legal right on red.  But she didn’t.  I’m quite pissed.

After a good bit of time, she comes to the realization that she could make the right on red, and turns.  I follow suit aggressively.  The road begins to go downhill.

And this is where I realize that this was the exact same scenario in which I dreamed about, except for that it was daytime instead of dusk.  The minivan that was pissing me off just moments ago was the same minivan from my dreams.

I eased off the gas and ceased to close the space between us.  There was no abrupt reason to slam the brakes for anybody, but had I taken the requisite actions to mimic my dream, I’m sure there would’ve been, since there was mounting volume ahead of us

Deja vu doesn’t occur that often to me, and even more so, that I actually remember all the corresponding events to actually put it out in writing.