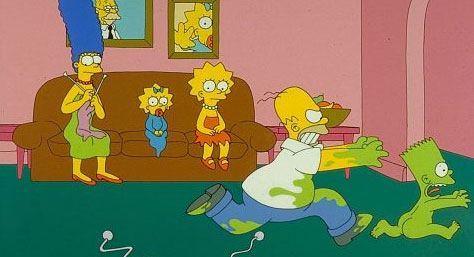 For the first time in quite a significant while, I sat down and watched an episode of The Simpsons last night, while eating dinner.  It was pretty obvious that this episode was in honor of Black History Month or equivalent, due to the nature of it.  But the biggest impression was left on me in the final two minutes, as Grandpa Simpson drops the bomb about the family history, and reveals that the Simpsons lineage has some African-American in it.

Homer is 1/32 black, thus making Bart, Lisa, and Maggie 1/64th.  And suddenly all of them are gushing over how awesome it is, and how it explains all sorts of racial stereotypes that they’ve had the propensity to demonstrate from time to time.  That explains why . . .

I know that The Simpsons is pretty non-continuous, and that such a reveal will be forgotten / has been forgotten in current episodes, but I can’t help but wonder the thought process behind the story.  It felt like a little bit of an attempt to draw reaction and hope it gets ratings.  Maybe it’s to combat The Cleveland Show?  No matter, it seemed a tad stupid.

Say what you will about the Simpsons, but they’re for better or worse, the longest running sitcom in television history.  With this little nugget of information, does this also make the Simpsons the longest-running black sitcom in history, passing series like The Cosby Show, and The Steve Harvey Show?  That’ll be some interesting trivia to dredge up in the future.