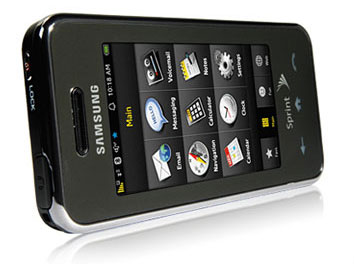 Right before I got back from Virginia, I noticed that the touchscreen on the Samsung Instinct I’d been using for the last 21 months was no longer responding to my touches. Frustrated, I went through the steps to alleviate any glitchy behavior; rebooting the phone, popping out the battery, putting it on its charger, but to no avail, my phone was not working properly. I couldn’t help but notice a water / moisture spot on the screen, and rubbing it did nothing; somehow, it was underneath the screen, how it go there, I had no idea, but I was resigned to blaming the problems on it.

I carefully lifted the transparent safety screen off of the phone, and equally carefully wiped away the spot. I gingerly applied the screen back onto the hardware, and lo and behold, key strokes began responding again. Upon initial diagnosis, everything seemed to be working fine; except for the small nuance that anything at the top 1/10th of the screen was registering low – in other words, trying to push “2” on the numeric keypad would result in “5” being entered. Finding this behavior unacceptable, I proceeded to perform surgery on my phone again.

This was not a good idea. Somewhere along the line, I severed some foil-thin circuitry, and the phone would no longer register any key strokes, unless I was pushing into the depths of Hades into the top-left corner of the physical phone itself, where the severed circuitry likely occurred.

Long story short – this was not the first and only time I have been frustrated with the Instinct, as with the ushering of the next generation of Android phones, it has been more or less abandoned by Sprint and Samsung themselves, and has suffered a litany of inconsistencies, poor performance, and problems that are clearly not going to be fixed any time soon. The dead touchscreen was the final straw, and I decided to cut my losses, and re-up for two more years with Sprint, and I am now one of the few privileged techno-geeks to have acquired an HTC Evo4G. Seriously, as far as Best Buys are concerned, this was the last one in all of Metro Atlanta.

So for lack of a better term, good riddance to the Samsung Instinct, onto the future with my Evo. It is a little melancholy, because I have had Samsung phones, supporting the motherland for the last nine years, and this is the first time I will have a phone of a different maker. Unfortunately, poor performance is poor performance, and loyalty can’t be expected to continue with it in tow. However, things weren’t always bitter and upsetting with the Instinct – it definitely has seen a good share of good times in the 21 months that I had it, and I’ve been wise enough to capture a lot of it on its diminutive 1.3MP built-in camera. 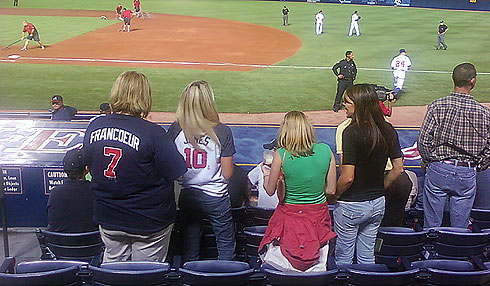 One of these is not like the other. It’s riotously hilarious to see such a girl-dynamic in person in this case, and on a night where the Braves got jobbed to the Phillies for the twelfth time in one season, it was the only redeeming point of my evening. 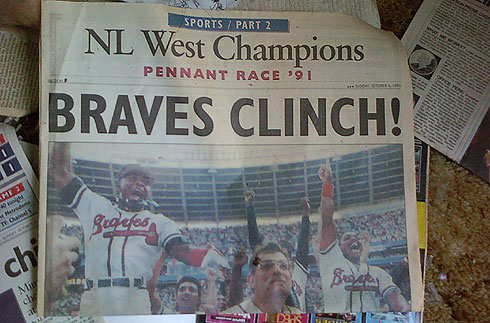 BRAVES CLINCH! (in 1991) – On a day in which Jen and I did some treasure hunting / photo shoot location scouting, we came upon this old abandoned, burnt-down home, and amidst the scraps and leftovers of a previous family’s life, I found this little gem – the cover of the Sports section of the Atlanta Journal, back from 1991, when the Atlanta Braves clinched the NL West, going from being worst team in 1990, to the best team in 1991. 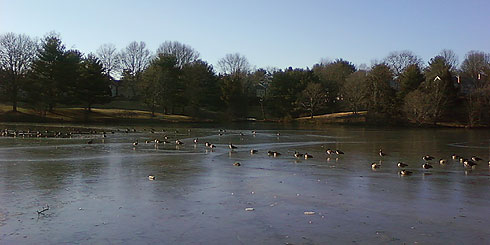 Ducks marching across the ice. On one of my many Virginia trips, I took a nice walk around my old jogging path, which circled around this gigantic lake. Being wintertime, I was privy to see this pleasant sight of an army of ducks frustratingly crossing over a frozen iced surface, unable to bathe and splurge. 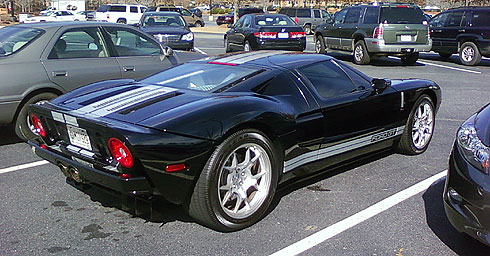 Ford GT500 . . . at Kroger. I’m not nearly as gung-ho over cars as I used to be in older times, but I still know a rare car when I see one. And this meticulously clean and fancy GT500 in the parking lot of a Kroger of all places intrigued me, on a beautiful afternoon. 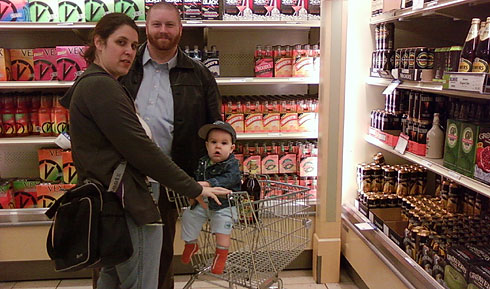 How parenting is done in Canada. On a trip up to Canada, my phone didn’t work, but the phone’s camera still worked fine. This is how parents do their thing up North – the following photo, with the baby in the cart, was taken at a liquor store. 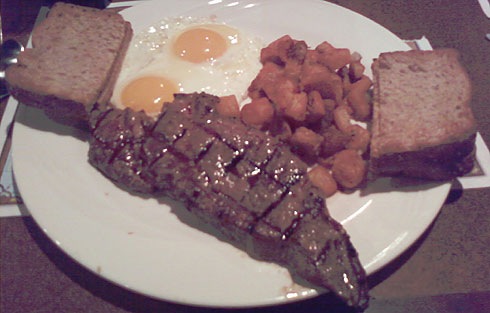 Erris Irand Cabbie Special. Now most people know about the various dinner steak specials at Las Vegas’s Ellis Island, but not nearly as many are aware of the breakfast-time gem available, known as the Cabbie Special. A New York Strip Steak, with two eggs, and hash browns, and it’s only like $4 bucks. 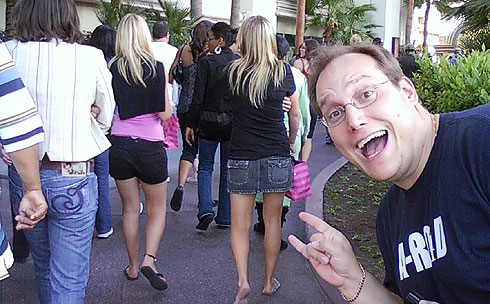 Proof was in the camera. I seriously do not even remember taking this photo, because I was that drunk at the time. After about nine Coronas while playing blackjack at the sports book of Harrah’s, my brother and I clearly creeped around these two long-legged blond chicks on our walk to Erris Irand for yet more beer. 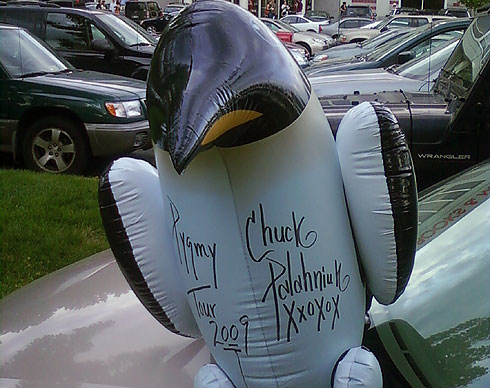 Chuck Palahniuk Pygmy Tour Penguin. One of the best moments ever was getting the opportunity to meet my literary hero, Chuck Palahniuk. This penguin is something I fought hard to get at his Virginia book tour stop. 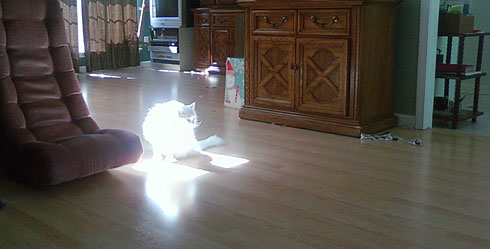 Celestial Cat. One of the few good things to come out of a shitty quality camera is the inadvertent effects it tends to give certain photographs. Aside from a little sharpening, there was nothing I did to this photo to make one of Jen’s cats look like a gift from Pujols in the sunlight.

The Nitro Girls shop(ped) at Gail K’s. Gail K’s is an “exotic” fabric store in Midtown Atlanta, where costumers, and people seeking unique fabrics paid inflated prices for special wares. It just so happened that the trashy and gaudy outfits worn by the WCW Nitro Girls throughout 1997-2001 were made from stuff available at Gail K’s. 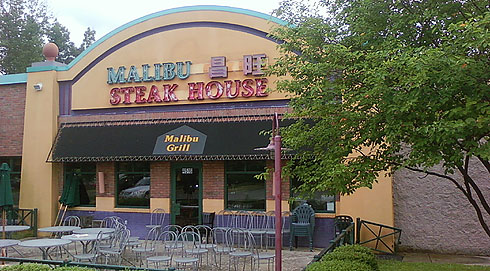 I’d rather you be dead than be like this. One of the worst days of my life was the discovery that some Chinese people took over one of my favorite restaurants of all time, the Malibu Grill’s Fairfax location, and turned into this bastardized mixture of the dead venison remains of Malibu, combined with a shit Chinese restaurant. It is better to remember history, lest we be condemned to repeat it. 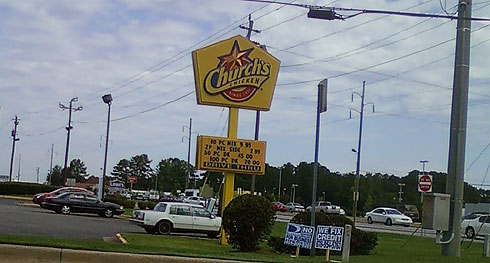 Church’s Chicken offers 100-piece boxes. There’s an obvious joke here that I’ll refrain from making this one time, and the local demographic does not help it, but I have ask, seriously? A 100-piece box? Even the biggest parties and potlucks I’ve ever participated in hadn’t seen the necessity for 50 pieces, let alone double that. 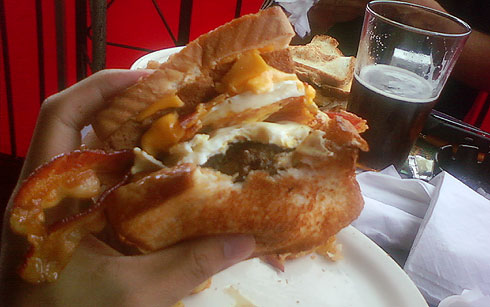 Vortex’s Triple-Coronary Burger. An acquaintance from Cincinnati came to visit Atlanta, and together we went to the Vortex Bar and Grill in Little Five Points and feasted on this monstrosity – between two grilled cheese sandwiches, was a half-pound burger, covered in two slices of cheese, two fried eggs, and five strips of bacon. And yet, I felt fine after eating it, too. 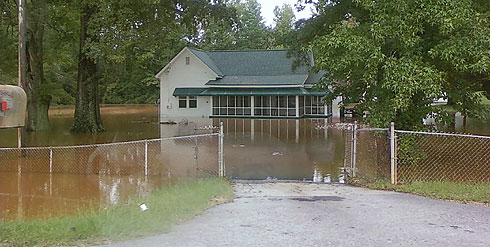 The Atlanta Flood #1. Some time in the late summer / early autumn of 2009, a major flood ripped through the Metro Atlanta area. Nobody I knew was closer to the extent of some major damage than I was, and while running what I thought were harmless errands were met with some scary reality, as homes like this one, just a few miles from my house, were utterly inhabitable by flood waters like seen here. 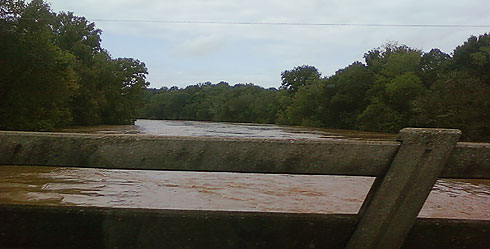 The Atlanta Flood #2. This moving shot was taken while I was crossing over the Chattahoochee River. On any normal given day, the water’s height would be incapable of being seen, but at the time of this flood, the water’s height literally reached to where another foot higher, would have literally overflooded the bridge itself. 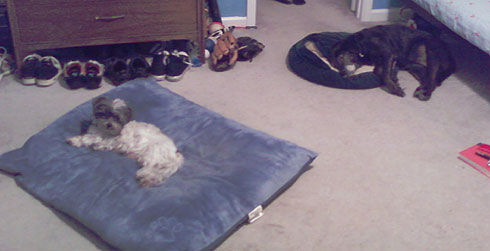 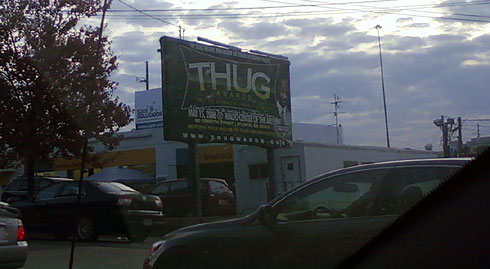 The T.H.U.G. Awards. That’s funny, I thought being called a thug was pretty derogatory, but I guess this can be chalked up to the mentality to “own” it, so that it can’t be used in malice anymore. In this instance, “THUG” stands for “Tribute to His/Her Urban Genius.” Riiiiggghhht. 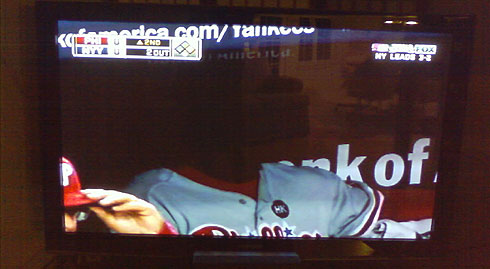 Ryan Howard is really black. The best part is that even without the shitty camera, FOX’s shot of Ryan Howard in the night-time dugout of Yankee Stadium was dark enough to where all the viewer could see was a Phillies jersey.

It’s just a Hyundai. Okay, I know Hyundai has come a long, LONG way since the late-90’s, and the Genesis is certainly a fine piece of automotive hardware, but it’s still not justifiable for a Hyundai (or any car for that matter) to pull the card of douchebaggery and double park in what is already a really packed parking lot. 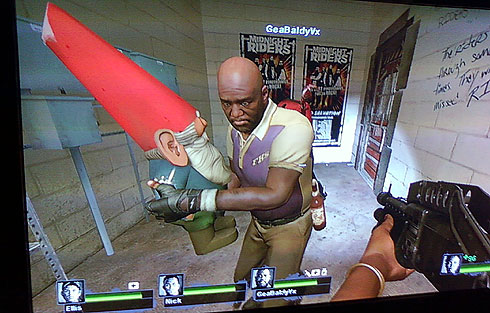 Guardin’ Gnome. One of the most intriguing challenges in Left 4 Dead 2. 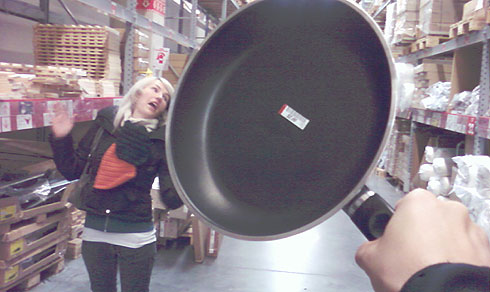 Fryin’ Pain Here! It’s kind of easy to tell when Left 4 Dead 2 came out, and the influence it had on me, more or less.

About 6,000 miles short. The distance from the Earth to the Moon is roughly 230,000 miles and some change. At the time of me checking the odometer for the last time in my beloved 2001 Nissan Sentra, I am disappointed to know that I will have just fallen short. 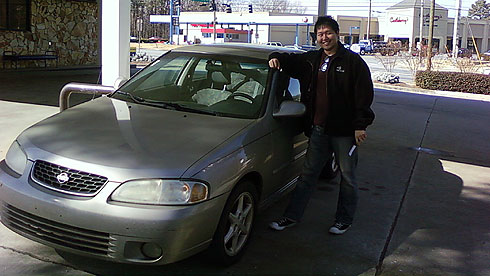 The last photo. This is the last ever picture taken with my former car. That I loved so dearly. 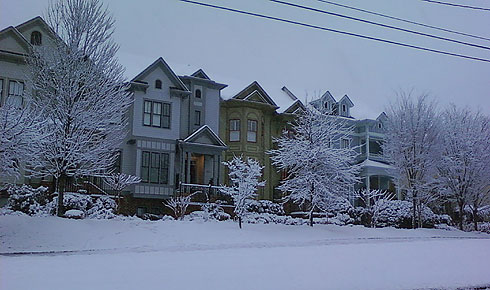 Atlanta Snow. Now we’re entering the realm of photos that some of you may have already seen, but for posterity’s sake, they’re showing up again. In a rare ecological event, the City of Atlanta was blessed with some snowfall earlier this year, and making some truly magnificent sights. 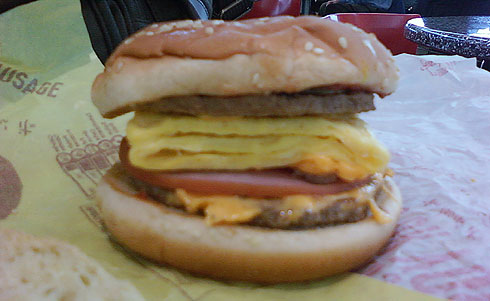 The Mc10:35. Something I found out about on the internet that piqued my curiosity, and I felt the need to try it myself. On a morning where I got bumped off of three flights from Virginia to Atlanta, I found out that I had more than an ample opportunity to bring it to fruition. And honestly, it wasn’t that bad – kind of like a really hearty hamburger. 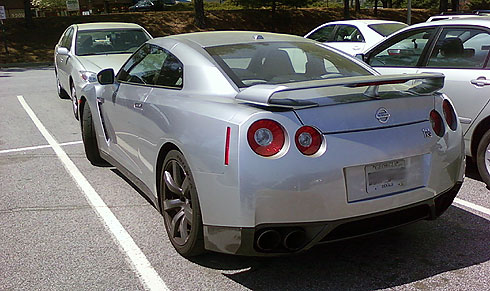 Nissan GT-R . . . at Target. One thing I’m fascinated by was how this guy wasn’t like most exotic sport car owners, and parked it in the furthest spot from from the entrance to a Target Greatland. 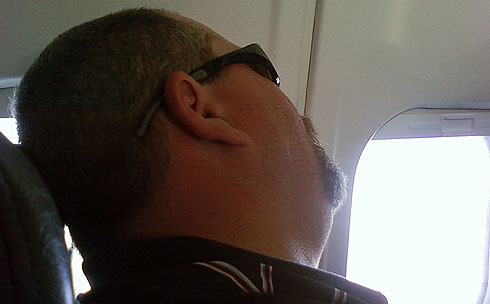 David Wells look-alike snoring next to me while I’m reading a book about David Wells. Really nothing else more to add to that. 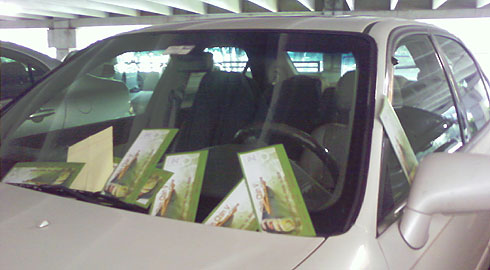 Payback to Miss Racial Profiling Lady. Most don’t need to be reminded of this little scenario, since it literally happened last month.

And with that, we have 21 months of pictorial good times that the Samsung Instinct actually gave to me. But now it’s time to move on.