Despite closing in on nineteen-years of age, the dog taco underwent some dental surgery, at an age when anesthesia could inadvertently become euthanasia. But like the true champion dog taco he is, he woke up, much to my delight, and hopefully the worst part of it all is in the past.

Speaking of man’s best friend, I watched the premiere of Elijah Wood’s Wilfred on FX. I’m not going to say that the first episode blew me away or anything, and the pace of the show is a lot dryer than what it was built up to be in previews and advertising, but I’m willing to keep pushing forward. It’s entertainingly uncomfortable at times, and I see the potential there with it becoming an amusing train wreck of a show. 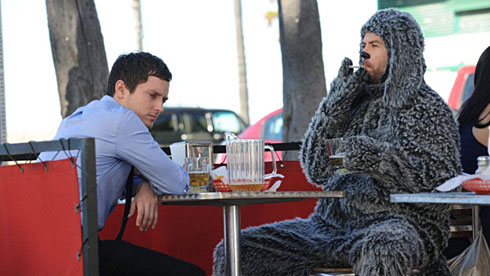 But the most fascinating thing to me is the concept of the show is pretty much parallel to the premise of Calvin and Hobbes. Much like Hobbes, Wilfred is manipulative and convincing, and gives Wood’s Calvin-like character a convenient excuse for all his destructive actions. The only real differences is that Wilfred is a canine and not a feline, and that everything else is more or less more grown up, and there are tits as motivation, mostly.