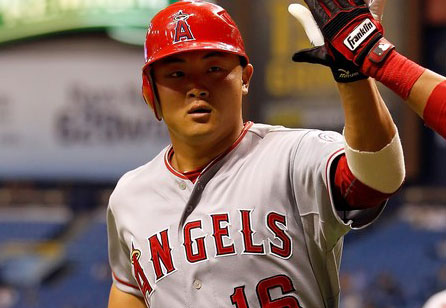 If I told you that about this baseball player named “Hank Conger,” most people would get the image in their head of a white guy.  Probably a sleepy-eyed Texan, closely associated with Hank Hill, from King of the Hill, since come on, just how many people out there really are named “Hank” anyway?

Well, pictured above is the real Hank Conger, a catcher for the Los Angeles Angels of Anaheim of Orange County, California.  Not what you were expecting, huh?

Don’t worry, it happened to me too.  When I first got a glimpse of this guy while the Braves were out in Anaheim earlier this year, I thought “who knew the Angels had a Korean guy on their team?”  And then he comes up for his first at-bat, and he’s announced to the plate as “Hank Conger.”  WTF?

Hank Conger is no doubt Korean, and like me, was born in the United States, Washington state, to be precise.  Through hearsay, I learned that the name change was for “simplicity,” and naturally, “Hank Conger” isn’t his real name.  But still, a Korean guy named Hank?  Seriously?

Fuck me, though.  Thanks to Hank Conger, I can’t really be the first Korean guy to actually legally name his son of appropriate Korean-descent “Hank,” now.  I had this shit all planned perfectly, because I wanted to name my first born “Hank,” and then some Korean name that starts with “H”, followed by “Hong.”

That’s right, his initials would most certainly have been HHH, and he could dominate all his friends throughout life who would learn to fear Triple H.