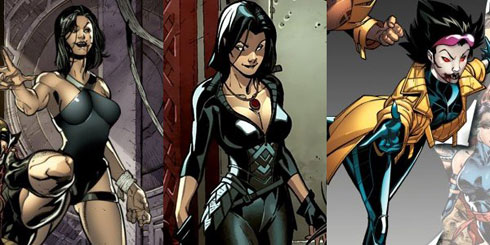 When I’m at work, the workload over the summer has been feast or famine.  I won’t get into the bickering inner-workings of the employee pool here, but the fact of the matter is that there are times in which I have an egregious amount of downtime, in which I’m left with absolutely nothing to do.  I can only peruse the same blogs and websites over and over again before the wells dry up, and before I know it, my mind is going crazy, and my eyes are ready to fall out from lack of stimulation.

So lately, I’ve been scouring Wikipedia, randomly clicking links, to see where the olive branches take me next; yeah, it really can get that bad.  I got onto comic books, and I realized that Wikipedia is a wonderful resource at catching up with storylines, and filling in some broad gaps at what’s happened to which characters throughout the years in which I lose track of comic books.

Needless to say, I believe that the comic market is kind of saturated and watered down these days, because the sheer number of convoluted storylines, disappointing canon, and the saddening fates to many comic book characters is pretty sad for the most part these days.  It’s kind of like the X-Men are Chili’s restaurants, but nobody wants to go to them anymore, because they’re too big and known, so all the talent is really festering in lesser-known books and stories, leaving the big name stuff with putrid shit, or something along those lines.

The worst of the statuses of comic book characters I was once fond of, would have to be the fate of Jubilee.  Did you know she’s a vampire now?  A fucking vampire.  Once fearsome, and one of the penultimate icons of the horror genre, but now, the epitome of whiny gay emo bullshit, and Jubilee is one of them.  I’ll admit, Jubilee wasn’t really among my favorite comic characters, I wasn’t one of those guys who was attracted to her and read for that particular reason, but retroactively reading the events that led to this pathetic current fate, I’d rather Jubilee have gotten the Legacy Virus or something a decade ago, and died as a pulpy cadaver of popcorn-looking bodily sores.  Surely, it would have been a better demise than the phoned-in destiny of becoming a fucking vampire.

Let’s hope Blade is still existence in the Marvel Universe and does Jubilee a favor, and cuts her fucking head off.

Reading comic books growing up, I imagined the masterminds of these arcs and storylines to be wiser and smarter, as those much older than I, and in the industry should be.  But nowadays, I have to imagine that a lot of the people in the industry, and those doing the writing and direction for today’s comic books, have to be well-populated by people around my age, approximately my age, or even younger than my age.  People who are influenced by modern times and trends, like whiny gay emo vampires.  And unfortunately, people who use such influences and apply stupid shit ideas onto existing properties, forever tainting the reputation of them forever more.  As well as the industry.

Jubilee the Vampire.  How fucking stupid is that.