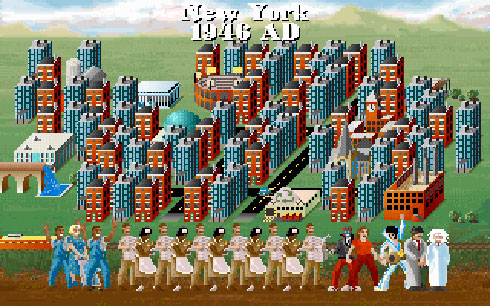 Remember in Civilization, eventually you build up enough technology and knowledge, and your civilization develops into modern times? Pavement is discovered and integrated, gone are straw huts and mud homes, in place of actual buildings and skyscrapers. And you get to witness all this advancement throughout game play, and you feel this sense of accomplishment and talent at deftly building your society, and advancing them through the times.

But in the blink of an eye, another country comes in and invades your towns and cities. If you cannot defend yourself from them, they will take over your properties. And in doing such, often times, they will steal your technology and knowledge, but in some cases, they’re more or less comparable primates, and they take your land back a few eons of development.

Take note of how New York City looks – before China invades and takes over the world.

Lately with the recent stories about U.S. colleges sending their basketball teams over to China, and the massive brawl that occurred between Georgetown University and one of the professional Chinese basketball teams, got me thinking. The biggest circumstances which led to the melee between the two teams stemmed from some blatantly biased officiating; naturally the Chinese referees were blowing the whistle on the Georgetown players, for doing as much as touch-fouls to breathing. Naturally, this frustrated the American basketball players to the point where ultimately, violence erupted. In short, the Chinese were cheating.

And then I thought about the last Summer Olympics, where China trotted out 12-14 year old girls, and claimed that they were all the requisite 16-year minimum in order to compete for women’s competition. Naturally, these pre-pubescent toddlers wiped the floor with all competition, since they had no bodies to compete with. Ultimately, they were caught when girls being girls, they started blogging about their 14th birthdays and other incriminating shit like that. Chinese cheating again.

And then I think about the sheer counterfeiting culture that is synonymous with China, Taiwan, and more or less that gigantic chunk of land in Asia. From fake Nikes, Rolexes, FOakleys, to whatever. They’re counterfeited, and sold at a cheaper cost, with full intent to take money away from their original counterparts. Let’s not go to the point where in China counterfeiters were blatant counterfeiting Apple, by having stores selling nothing but counterfeit Apple products, completely using their brand and identity. Cheating.

I know this is a broad statement, and I’m not really trying to include those Chinese-American folk that I know personally here in the states, but shit, the Chinese in China are some cheating motherfuckers. And they’re eventually going to take over the world. They’re all cooped up in their mass of land in Southeast Asia, overpopulated to the brim, full of desperate, starving, uneducated, primal commoners, but the fact of the matter is that they have legitimate manpower, and strength in sheer numbers. Few countries on the planet are as secretive and secluded like they are in China, and the conspiracy theorist in me has to suspect that they’re up to something. Something like world domination. And eventually, when America is at its weakest, the gates will flood open, and the Chinese will cash in their money in the bank and begin invading the United States, and other countries.

And much like in Civilization, it doesn’t matter if you have fortified walls, an endless army of primitive soldiers will ultimately still take over. And when China’s armies take over, this is what we’re going to get: 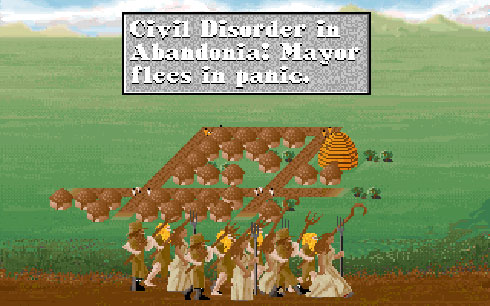 Straw huts, wooden granaries, dirt roads, and only getting sent back just an eon or so. And there’s nothing we’ll be able to do about it. Fucking cheaters.