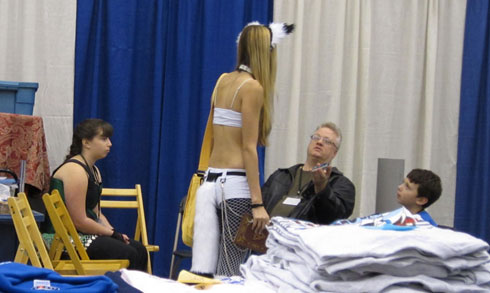 It’s funny, because I wasn’t really targeting this girl when I wrote the list of all the weird shit kids are doing now that I have no idea, but she happened to exhibit each and every thing I had to say that makes me feel old.  For starters, I question if she was even 18, but most certainly not 21.  She was parading around in tube top, booty shorts and the requisite fishnets that the kids seem to all like more so than ever, but also the animal tail, and the ever-important surgical mask with a bunch of shit pinned to it.  It was pretty much impossible to not have seen her, as she was constantly walking around the convention.

But anyway, while hanging out with Arex behind the Otakon booth, I witnessed this interesting exchange.  Littly Jimmy and less-little Lindsay wanted to go to Neko-Con, but dad had to tag along to be both chauffer and chaperone.  Dad probably wasn’t at all that thrilled about having to perform these parental duties, but that probably changed at the first horde of tight tops, short skirts, and ass cheeks hanging out.

The funny thing is when I took this picture, it was little Jimmy and less-little Lindsay that sat down first, looking exhausted and bored, with dad begrudgingly following suit, clearly disappointed by having his parade of jailbait tits and ass interrupted by these two sperms he wished his wife had swallowed instead.  But that didn’t mean dad couldn’t continue to have a good time.  As fates would have it, epitome-of-Neko-Con-girl came parading around yet again, and it was fortunately dad’s first time seeing her.  And right in front of his kids, a shit-eating grin showed up on his face, and he took several pictures of her, and chatted her up a little bit.  A little something for the spank bank for when the wife and kids are away.  Dad probably enjoyed Neko-Con more than the kids did, in the end.