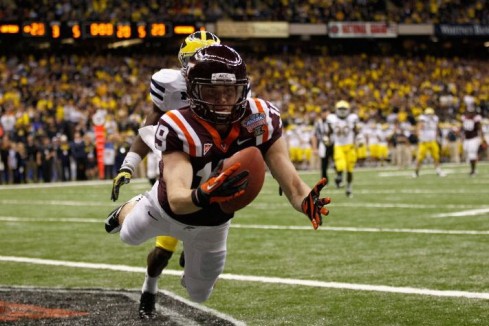 Pretty much any sports team I like or favor in any way shape or form never wins.  A sentiment that pretty much every sports fan goes through multiple times over in their lives, and even the most rational of sports fans always tell themselves that with perseverance, salvation will someday come, but even the most rational of sports fans simply get tired of the tired mantra and is entitled to a moment of weakness and necessity to vent.

I want to be upset with the officiating that pretty much just screwed Virginia Tech out of winning the Sugar Bowl, but the obvious truth of the matter is that it shouldn’t have come to that point in the first place.  If Tech could have just gotten their heads out of their asses and show a little bit of patience, intelligence and killer instinct, they really should have been up 17-7 at the half, instead of down 10-6, in the most comical of ways.  The defense would have resolved as it did the entire night, the annual Beamer fuck-up doesn’t even happen because being up, he’ll actually punt the ball, and Virginia Tech wins a meaningful bowl game.  Granted, Danny Coale doesn’t have the statistical game of his life, but I’m pretty certain he’d rather be a winner too.

Instead, as has been the norm over the last few years, I’m left with the dejected feeling again, of having been rooting for the losers, watching Tech lose to teams like Georgia, Alabama, Stanford, Clemson, and now Michigan.  I want to point and call all those teams overrated and undeserving, but the harsh truth is the fact that Virginia Tech is probably more overrated and undeserving than them all.  I’ll still root for them, and I wouldn’t bet that this is the last disappointment I’ll ever have while rooting for them, but the harsh reality is that they simply cannot win a meaningful game.  And the truth hurts.  Again, and again, and again.  Que sera, sera.