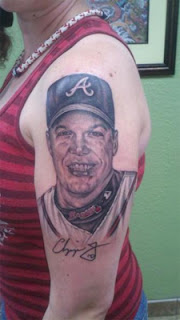 Now I like and appreciate Chipper Jones as pretty much all Braves fans do and should, but there’s no fucking way I’m getting his mugshot tattooed on my body.  To the credit of the tattoo artist, it’s very obviously, and clearly Chipper Jones, but at the same time, that’s not necessarily such a great thing.

I always said it would be nice if my future ex-wife were not completely disgusted with the idea of baseball, but there are lines that even I wouldn’t want crossed.  Seeing Larry Wayne Jones the Third tattooed anywhere on her body is an instant deal-breaker.  And that’s coming from someone with dorky anime tattoos on both his shoulders.