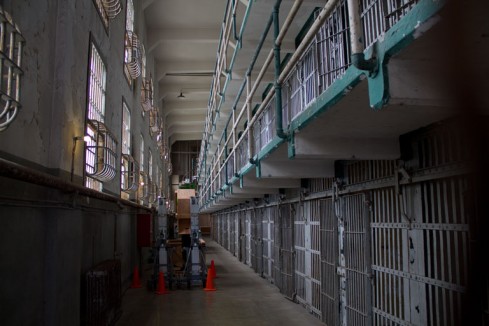 The third day of the trip saw Huzzard and I opt to stay on the San Francisco side of the bay during the day.  From what I was told, and from what I could guess just from passing through, Oakland is about as desirable of a place to visit and hang out in as apparently, crossing any metaphorical train tracks in any instance.  So, we did the Alcatraz tour, and went to the hipster part of San Franscico, before taking the train into Oakland, and visiting the home of the Oakland Athletics.

Despite the fact that Oakland seems every bit the lower-class, sketchy segment of the Bay Area, I have to say that I really liked the Oakland Coliseum, even if it’s called the “O.co Coliseum,” yes, named after the company that was once known as Overstock.com.  Based on all of the things I heard, I was prepared to not like the Coliseum, and initial visuals of chain link fences, razor wire and late gate openings didn’t exactly help.

But wandering around the multi-purpose arena and getting a look at the field from the various available angles, and seeing how Oakland diehard fans came to cheer, I have to say that I surprised myself by how appealing I was finding the whole place.  There’s something charming and simple about the Oakland Coliseum, and A’s fans are so drastically different from their counterparts, just on the other side of the bay.

Overall, I found the experience in Oakland to be superior than that of the fancy-schmancy San Francisco.  Typically, I try to end my trips on high notes, and with Oakland coming last, I didn’t think that was going to be the case.  How wrong I was.